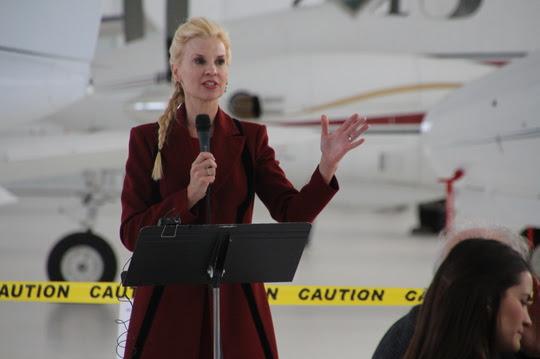 On December 9, the colorful quilt of aviation and aerospace presented its splendid hues under the classic white canopy of the Atlantic Aviation hangar at Wiley Post Airport. Table linens and sounds of laughter among aviation-themed piano music filled the void between business jets, pilots, and aerospace professionals.  The rich diversity of aviation and aerospace in Oklahoma were all represented. Airport managers and staff, air traffic controllers, military aviation, general aviation, corporate and business aviation, commercial aviation, and flight instructors, etc. were all in attendance to see the unveiling of the momentous first ever Oklahoma Women in Aviation and Aerospace Day event.  Author and pilot Erin Chappel (Shown above) served as the keynote speaker.

The Aeronautics Commission had a vigorous legislative agenda during the 2017 Oklahoma Legislative session and aviation advocacy was priority number one for Victor Bird, director of Aeronautics.  Oklahoman Women in Aviation and Aerospace Day was inspired by a then wide-eyed new staffer, Sandra Shelton, who was hired as the agency’s legislative and government affairs liaison.  Shelton met Pearl Carter Scott during her staff tenure at the House of Representatives, and then later assisted with a portrait dedication while working for the Oklahoma State Senate. This sparked an idea a year in the making.

Oklahoma’s Eula Pearl Carter Scott was born December 9, 1915 in Marlow, to father George, and mother Lucy, who was an enrollee of the Chickasaw Nation. Pearl’s colorful life took her from Marlow to the Chickasaw National “Hall of Fame”. After learning how to drive at the age of 12, she soared to new heights and learned to fly at the age of 13 under legendary aviator Wiley Post. She became the youngest pilot in the United States with her first solo flight on September 12, 1929. She later worked as a stunt pilot where she performed until ending her career to focus on her children and family.

Pearl had a major impact on the life of Shelton. Shelton’s idea was to commemorate the contributions made by Pearl Scott and others by declaring a date in statute annually honoring female achievements in aviation and aerospace. That small and simple idea became legislation through the lawmaking process at the Oklahoma State Capitol.

Senator Paul Scott, of Duncan, agreed to carry the measure and filed the request bill on behalf of the Aeronautics Commission via Senate Bill 230. “Pearl Carter Scott was an inspiration to all women in and outside of aviation. There are many women who have made great strides in aviation and aerospace in our state, and I believe all female aviators and aerospace personnel should be recognized for their contributions,” said Scott. Paul Scott has no known relation to Pearl Carter Scott.  Representative Scott Biggs of Marlow also successfully carried the measure through the House of Representatives.

A full year later, having gone into effect November 1, the idea has become law.  A celebratory brunch was organized by the Oklahoma Aeronautics Commission, the Oklahoma Airport Operators Association (OAOA) and Atlantic Aviation. “When the Oklahoma Aeronautics Commission approached OAOA about hosting an event to commemorate the first annual Oklahoma Women in Aviation & Aerospace Day our membership jumped at the chance to inform the public at large that women have had, and continue to have, an important role in aviation,” said Lisa Jewett, OAOA president.

“The men and women that make up the membership of our association recognize that there are organizations such as the 99’s and Women in Aviation International which, for decades, have been carrying the burden of telling the female aviator and aerospace workers’ story. We don’t want to impose on their leadership that was well established long ago. We recognize there has been a parade of lives leaving a never fading stream of achievements in aviation and aerospace. We have no intention to lead the parade. We just want to be in the back pushing the band to play louder and lift those up when they become tired and weary,” said Jewett.

With the passage of the bill, it will now become a foundation for focus on a declared date to plan events highlighting airports, women’s contribution to aviation past and present, and to bring the excitement of aerospace exploration and learning to young women throughout the State of Oklahoma. Oklahoma Women in Aviation and Aerospace Day is now law because of SB 230, to be commemorated on December 9 annually.

“The heritage of aviation in our state is, indeed, a rich one. Aviation has really been with us since statehood as Clyde Cessna did test flights of his early aircraft in western Oklahoma just a few years after statehood. Business aviation began right here, in Oklahoma, when Frank Phillips, W.G. “Bill” Skelly, and other oilmen found that the fastest most efficient way to get to their oilfields was with an airplane. One of Phillips’ pilots was Wiley Post. But, men were not the only aviation pioneers in Oklahoma,” said Bird.

“Bessie Coleman, who attended Langston University, was the first African American female pilot. Shannon Lucid grew up in Bethany and attended the University of Oklahoma where she obtained her Ph.D. in biochemistry in 1973. Lucid was selected by NASA for the first class of female astronauts. She was the only mother in this first class. Geraldyn Cobb from Norman was part of the “Mercury 13,” a group of women selected to undergo physiological screening tests at the same time as the original Mercury Seven astronauts, as part of a private, non-NASA program,” said Bird.

“From Pearl Carter Scott to Shannon Lucid, women have made an invaluable contribution to aviation. OAC is proud to partner with OAOA, Atlantic Aviation, and the other sponsors to celebrate the achievements of women in Oklahoma aviation,” concluded Bird.

A video of the event may be viewed at https://www.youtube.com/watch?v=KpsAt73fVa8.