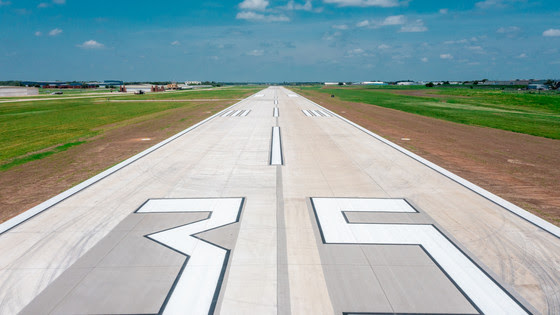 The project, which began in 2020, was one of the largest single-phase undertakings at a general aviation airport in Oklahoma. The project reconstructed a majority of the runway, replaced the runway lights and guidance signs and significantly enhanced the drainage of the area. The Federal Aviation Administration (FAA) funding for the $8.1M project was directed through the Oklahoma Aeronautics Commission’s (OAC) 5-year Airport Construction Program and consisted of a combination of FAA Supplemental Appropriations, Airport Improvement Program (AIP) funding and Coronavirus Aid Relief and Economic Security (CARES) Act local matching funds.

“The new runway at Ponca City Regional Airport will attract new businesses to Oklahoma help our economy continue to grow,” said Gov. Kevin Stitt. “A strong infrastructure is key to becoming a Top Ten state and Oklahomans should take pride in these improvements to our state airport system.”

“At 7,200 feet long, this runway is the ninth-longest civilian runway in the state,” U.S. Sen. Inhofe said. “It can accommodate just about any aircraft in the business jet fleet, opening the airport and the surrounding region to future economic development opportunities. I would also like to commend the City of Ponca City for taking on such a tremendous project in the height of the COVID pandemic as it demonstrates their vision and leadership in the aviation community.”

Oklahoma Secretary of Transportation Tim Gatz and local officials led the ceremonial ribbon cutting signifying the optimistic future of both the Ponca City Regional Airport and the surrounding communities. Gatz has been active in the support of the OAC’s aggressive efforts to improve pavement quality throughout the 108 public-use airports located within the state system of airports.

“The construction completed at this airport will ensure the viability of the runway for the next 40-plus years and provide for a great aviation infrastructure asset for the north-central Oklahoma area,” Sec. Gatz said.

Since 2000, this airport has received over $26M in funding to support infrastructure upgrades and support the functionality and improvement of the facility.

In addition to the ribbon-cutting, attendees enjoyed the singing of the National Anthem by Emma Valgora and the posting of the colors by Scout Troop #524 with the First Lutheran Church. The crowd heard from additional dignitaries including State Representative Ken Luttrell, Mayor of Ponca City Homer Nicholson and State Director of Aeronautics Grayson Ardies.

“Working with Mayor Nicholson and the City Manager Craig Stephenson on this project has been excellent,” said Director Ardies. “The airport currently hosts more than 50 based aircraft including three business jets.  Many local businesses utilize the airport including Phillips 66, Community Health Systems, Albertsons, Walmart and Wyatt Construction. With aviation and aerospace as the state’s second-largest economic engine, this community is now positioned for further aero commerce and tourism.”