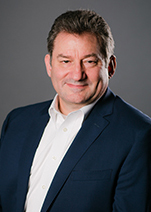 Landrum & Brown (L&B) has announced the appointment of Mark Perryman as Chief Executive Officer. Perryman has been with the firm for over 25 years and most recently served as the firm’s President and Chief Operating Officer. He succeeds Jeffrey Thomas, who served as the firm’s CEO since 1980 and is leaving in June 2017 after a career of 50 years with L&B.

During his tenure as COO, Perryman oversaw the global business operations of the firm with a focus on serving clients within the Americas and the Middle East. He has over 35 years of airport planning and development experience including leading master plans, terminal plans, strategic plans, environmental assessments and impact statements, land use plans, and noise compatibility studies for airports around the world.

“I am very honored and humbled to be selected as L&B’s next CEO and look forward to working with L&B’s outstanding team of professionals to shape and guide the future of this great company,” Perryman said.

Mr. Perryman is a veteran of the United States Air Force where he served as a base architect and planner. He holds a Bachelor of Science in Design from Arizona State University.