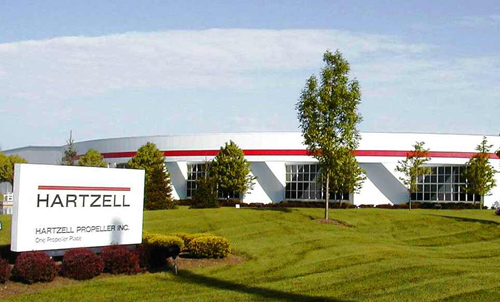 During 2013, Hartzell delivered its milestone 20,000th propeller as part of the company’s Top Prop™ aftermarket program. Also in 2013, the company delivered more than 3,700 new propellers to a number of aviation markets including, general aviation, business aviation, scheduled airlines, and military and unmanned sectors, making it the world’s most prolific aviation prop manufacturer.

“We’ve doubled our capital equipment for producing structural composite blades. The market’s responding very positively, and I’m pleased to say we’re hiring and have been hiring for the past couple of years,” said Brown. “This is a good time for us to invest in general aviation as our core business. We fly airplanes and it’s been a lot of fun.”

Hartzell delivered more than 3,200 aluminum blade propellers and more than 500 structural composite blade propellers to customers in the United States and around the world in 2013. In addition, the Hartzell Service Center overhauled nearly 250 Hartzell props during the year. Hartzell Propeller employment stands at more than 280 people.

Also during 2013, Hartzell Propeller President Brown was elected to serve the industry as the vice chair of the General Aviation Manufacturers Association. He also serves on the board of the Experimental Aircraft Association.

That was followed by another Raisbeck-Hartzell joint development program for advanced four-blade swept airfoil propellers for Beechcraft King Air C90 series aircraft. These new Raisbeck-Hartzell aluminum propellers will be available from Raisbeck Engineering beginning in 2014.

Hartzell Scimitar for Cessna T206H
Hartzell Propeller’s scimitar aluminum propeller, designed for installation on production Cessna T206H Turbo Stationair aircraft, was certified during the year and became part of the company’s Top Prop aftermarket program. The three-blade unit improves aircraft performance significantly and has an 82” diameter, in contrast to Cessna’s original factory prop with a 79” diameter. The new propeller is also available with de-ice boots.

Hartzell, RV8tors Team
Hartzell Propeller and the RV8tors formation aerobatic display team joined forces to demonstrate the performance of Hartzell’s advanced structural composite propeller across Europe. The RV8tors, pilots Alister Kay and Andy Hill, are one of the UK’s most popular display teams.