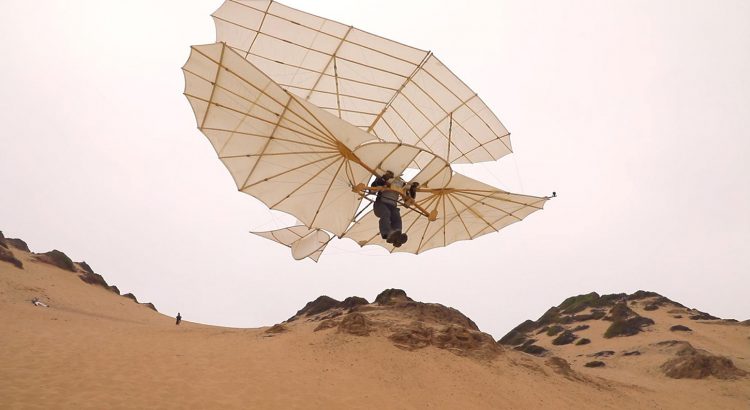 German aviation pioneer Otto Lilienthal’s bi-plane glider “Großer Doppeldecker“ will be on display in the Outer Banks from December 14-16 and the German Aerospace Center (Deutsches Zentrum für Raum- und Luftfahrt) will attempt a test-flight of the iconic aircraft during this time as well. The glider’s first flight since 1896 successfully took place in California over the summer.

While Lilienthal’s legacy and the sight of his glider alone will be enough to thrill aviation enthusiasts, the fact that the test-flight will be attempted in Kitty Hawk is a special nod to the German-American friendship as this town is of course home to the Wright Brothers. Replicas of their aircraft will be on display alongside Lilienthal’s glider. This is only fitting as the Wright Brothers referred to Lilienthal’s work at the time. Wilbur Wright wrote of Lilienthal in 1912: “Of all the men who attacked the flying problem in the 19th century, Otto Lilienthal was easily the most important. He was without question the greatest of the precursors, and the world owes to him a great debt.”

Lilienthal was the first person to invent, build and fly an aircraft, more than 120 years ago in 1891. In 1895 he received the US patent for his monoplane glider, which he flew himself several hundred times downhill in front of public. The more than 100 photographs that showed him in the air triggered an epochal shift and resulted in worldwide efforts to solve the problem of flight for all times. The American newspaper publisher William Randolph Hearst bought one of the gliders. The glider was initially flown near Bayonne, New Jersey in April 1896. After several weeks of practice Harry B. Bondine flew the monoplane glider over distances of up to 75 yards. The American Engineer Octave Chanute, who was in personal contact with Lilienthal and later on with the Wright brothers, helped young flight enthusiasts like Augustus M. Hering to start even more successful flight experiments in bi-plane gliders within the same year.

After Lilienthal’s deadly crash with his soaring apparatus in August 1896 there were rumors however, that Lilienthal’s flying machines couldn’t be controlled well and many doubted that they were flying stably. In 2016 the flight stability of the monoplane glider had been proven in wind tunnel tests at the German Aerospace Center (DLR) for the commemoration of the 125th anniversary of human flight.

The legacy of German-American cooperation in this arena continues through today as it was the American flight instructor Andrew Beem (Windsports, Los Angeles) and German aerodynamics professor Markus Raffel who tested the stability of the “Großer Doppeldecker” and have worked together to bring Lilienthal’s work and legacy to life.

With a multitude of successful and safe flights of the biplane on the Californian coast, the flight stability and especially the weight shifting control of the sophisticated apparatus have now been proven by Beem and Raffel.

Beem commented on his spectacular flights: “The ‘Large Bi-Plane’ was easy to control in pitch right from the beginning of our tests. After some minor readjustments, it was also nicely trimmed in roll and could nicely and intuitively be directed downhill, considering that it was designed in the 1890s. Flying the ‘Large BiPlane’ was one of the most fun flying experiences of my career. Otto Lilienthal designed a fantastic flying machine.”

The flights typically lasted 10 to 14 seconds and were limited to distances of about 100 meters due to the surf. The wind came from the west/southwest with very constant speeds of between five and seven meters per second (18 to 25 kilometers per hour). For safety reasons, the flight altitude was restricted to three to four meters above the ground. „Flying in minor heights is safely possible and can be made without risk. The apparatus is acceptably stable on all three axes and – given enough practice – can be safely steered downhill and landed easily. I advise however, against flights in higher altitudes, rough weather conditions and turning flights. After all that is not what the apparatus was intended to be used for in 1895″, said Raffel.