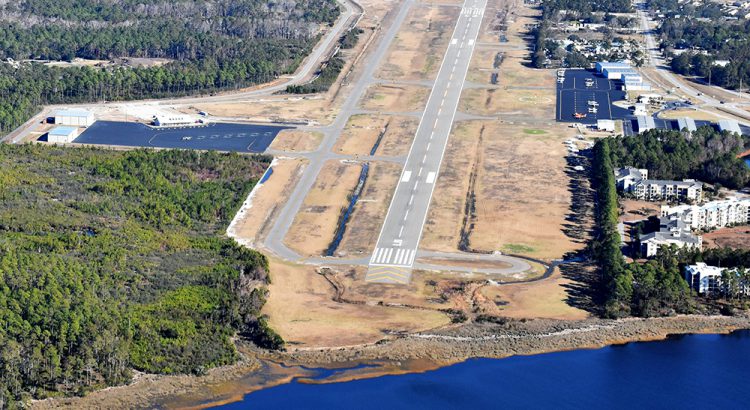 Located near the last place on the East Coast going north that palm trees grow naturally, the Cape Fear Regional Jetport, Howie Franklin Field, has grown steadily over the last 25 years to become a general aviation airport of note in North Carolina. The fourth busiest in the state, the airport has seven golf courses and seven marinas, all within a five-mile radius.

Even during the pandemic, the airport has continued to see folks fly in from around the country, attracted by the convenient location to amazing coastal living with great weather. NetJets has been the biggest customer during the coronavirus.  All of this bodes well for the future of the airport, which operates in the black and has been under the steady direction of Howard ‘Howie’ Franklin since 1994.

The biggest challenge for Franklin during his tenure has been to, “wake people up to the possibilities – this is Hilton Head [South Carolina] thirty years ago,” says Franklin. “Folks took the weather for granted.” Brunswick County, home to the airport and communities of Southport and Oak Island, is now the fastest growing county in North Carolina, and the airport is positioned well to take advantage of that.

Franklin told the State Aviation Journal that developers around the country, look at their location on the Intracoastal Waterway, with close proximity to the ocean and recognize that it is possibly the only property of its kind where the aviation community could have water access. “Combine that with our great weather and you have the ideal aviation community.”

For Franklin, who grew up on the South Shore of Long Island, NY, this area of North Carolina had some similarities to what he experienced in his childhood. That made it easier for Franklin to accept the position as airport manager and locate to the area. Although involved in aviation during his career, running an airport was not necessarily what he had envisioned for his later years.

Franklin spent 29 years in the U.S. Air Force, 24 of those years at Andrews Air Force Base as part of Special Missions Operations and 18 years on Air Force One, as a Chief Master Sergeant. His bio states that he has more than 300 stories he tells, of his memories of working around Presidents, First Ladies, Vice Presidents, Cabinet Secretaries, VIP guests and the U.S. press corps, which he shares with groups around the country. His airport office contains photos and keepsakes from that era of his life. But also evident in his office are items that speak to the pride he feels about the airport that shares his name.

When Franklin first began to manage the airport, it was just him. To help measure the growth the airport has seen since, there are now ten employees under his leadership. Franklin is quick to attribute the success of the airport to good planning and the need to diversify. There are 16 businesses that are either on the airport or use the airport for their business, and Franklin states that more businesses will be added to create a steady revenue plan. “GA airports today have to diversify to make it,” says Franklin.

That diversification includes a bait & tackle shop, two flight schools, two mechanics, a charter business, and Brunswick Design Interiors which is located in the new terminal building. Deborah Blomfield, Principal Designer for Brunswick said, “I believe having my studio located at the Cape Fear Regional Jetport is valuable to us for two different reasons. The first one is more obvious. The vast majority of the private jets that fly into the Jetport have homes on Bald Head Island. This provides exposure for us to our target market and convenience for our clients.”

The second reason has a great deal to do with Franklin. “Howie believes in supporting the businesses who support him,” said Blomfield. “He has established a spirit of collaboration amongst the different tenants. For example, Hamilton Realty has made several introductions for me to their clients and I plan on working with them when we are ready to build our new home. Most recently, I was engaged to assist in the renovation of the East FBO to provide a layout to accommodate Hertz and the new Always Ready Cart Care Club Car showroom.”

The airport also provides a public service, serving as a staging point during natural disasters. Franklin says that in the wake of hurricanes, the airport is used by medevac, wildlife agencies, the Coast Guard and the Sheriff’s Office. “The airport has had 250 aircraft bringing in supplies.”

Franklin believes the future looks bright for the airport, his passion and enthusiasm catchy, as he restates the move towards developing an exclusive aviation and marina community. He also hopes to get to the point where they can use all of the revenue received from fuel sales on new projects – something other than just paying the bills. “Those projects include box and t-hangars which immediately increases revenue not only for the county and towns but for the state as well,” said Franklin.

As the writer of this article wrapped up his interview and headed for the door, he recalled Howie’s first words when arriving – “Sorry about the weather.” I smiled, glanced back over my shoulder and stepped out of the terminal into a glorious fall day. – ks