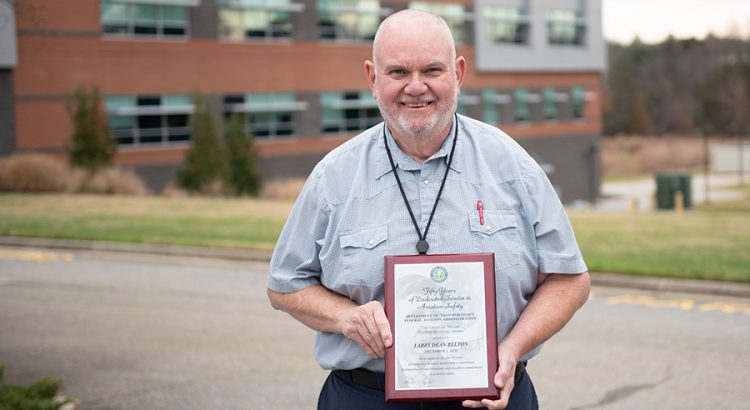 Larry Belton says it was a “mistake” he ever became involved with aviation. That “mistake” more than 50 years ago forever changed the life of the Program Director for the Aviation Electronics Technology Program at Guilford Technical Community College, located in Jamestown, North Carolina.

Over the past five decades he has impacted countless lives teaching aircraft maintenance at the college level while maintaining a passion for flying and restoring vintage aircraft.

Belton recently received national recognition for his many years in the aviation industry when he received the Charles Taylor Master Mechanic Award from the Federal Aviation Administration.

The Charles Taylor Master Mechanic Award is presented in honor of Charles Taylor, the first aviation mechanic in powered flight and recognizes the lifetime accomplishments of senior aviation mechanics. Taylor served as the Wright brothers’ mechanic and is credited with designing and building the engine for their first successful aircraft.

And all because of a “mistake” during his senior year of high school.

“As far as how I got into aviation is a kind of mistake. I have always loved airplanes, but (as a child) never got to be around any,” said Belton, a United States Air Force veteran who was a helicopter mechanic during his four years of service.

“The spring of my senior year a friend talked me into going to Piedmont Aerospace with him for a tour. From there it was all aviation.”

Belton grew up in Winston-Salem, North Carolina and says much of his early life was spent hunting and fishing with cousins in Davie County.

Belton has worked at Guilford Technical Community College in the aviation program since 1992. He began as an aviation systems technology instructor and now oversees the Aviation Electronics Technology Program

“Working for GTCC has been a good career move for me,” said Belton who restores antique aircraft in his home shop. “Aviation has been very good to me and by teaching, I can give some of that back and hopefully give someone else a good start in a rewarding career.”