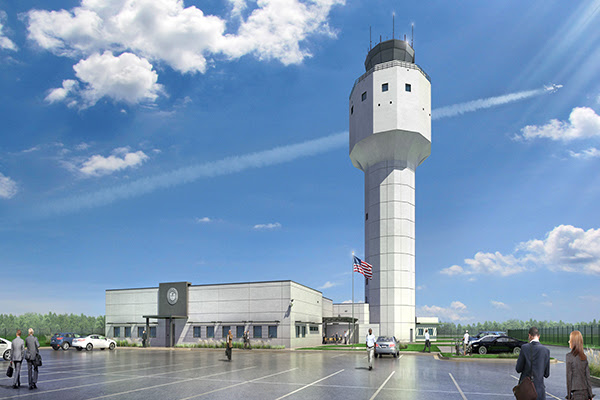 “This investment in infrastructure and technology will place the airport in an excellent position for future growth,” said Michael O’Harra, Regional Administrator of the FAA’s Southern Region. “The new facility will enable air traffic controllers to provide the safest and most efficient service to Piedmont Triad area travelers for decades to come.”

“It has been 45 years since the current Air Traffic Control Tower was put into service, said  Steve Showfety, Chairman of the Piedmont Triad Airport Authority. “Today we are turning a page. This new tower will give us the modern infrastructure we need to live up to the vision of our master plan and will allow the Piedmont Triad International Airport to continue to add new passenger service, serve our current tenants and also add new tenants who will bring investment and jobs to the community.”

The new control tower will be 180 feet tall, topped by a 550-square-foot tower cab to accommodate up to eight positions for air traffic controllers. The 15,650-square-foot base building will anchor the new tower and will house the Terminal Radar Approach Control (TRACON) with up to 10 radar positions for air traffic controllers. The TRACON controls airspace within a 60-mile radius of the airport, which includes 20 general aviation airports. It will be equipped with the latest technology for communications and navigation.

North Carolina is the only state where the FAA is building two new air traffic control facilities. The FAA will commission the new 370-foot-tall tower at Charlotte Douglas International Airport in summer 2020.

A total of 46 FAA employees work at Greensboro Tower – 31 in Air Traffic and 15 Technical Operations employees who install and maintain 266 facilities at Greensboro, Winston-Salem, Burlington and Martinsville, Va., airports.

The FAA awarded the construction contract to Archer Western Construction, LLC, of Chicago, Ill., in October 2018. The new facility will replace the existing 90-foot-tall tower that has been in operation since 1974.