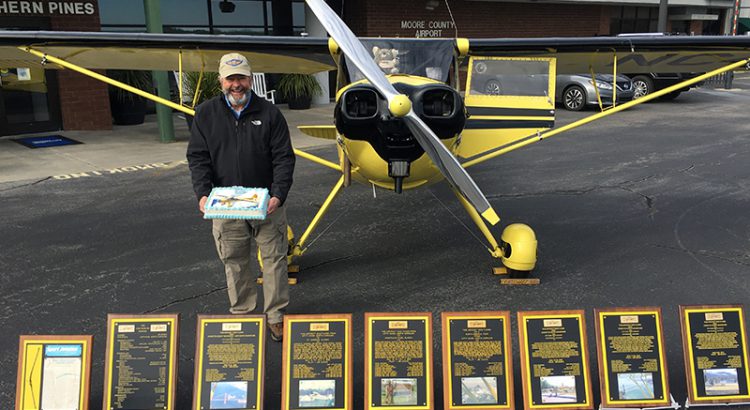 Although the Carolina Canary could be one of North Carolina’s feathered friends, it is in fact, a beautifully restored and maintained, all yellow high-winged airplane owned and flown by Jim Zazas of Carthage, NC.

The Moore County Airport, Carthage, NC based airplane, is a Luscombe 8A powered by a 65 Hp Continental engine that was “born” or delivered in Garland, TX on January 17, 1946. It was subsequently delivered to the Plaza Airport about 5-6 miles northeast of Charlotte, NC on January 21, 1946. Although the Plaza Airport was closed in the 1950’s, the Luscombe flew on and in May of 1980, Zazas became the 16th owner of the airplane, an airplane that has never been based outside of NC.

Zazas was blessed at an early by his late father who showed him unconditional love and fully supported what young Jim wanted. This led him to learning to fly and subsequently to flying C-130 Hercules transports in the US Air force for six years. He then became a pilot with Piedmont Airlines until the merger with American Airlines where he flew such “heavy metal” as the Boeing 727, 757 and 767 passenger jetliners. He also says he was very fortunate and blessed by friends who enabled and allowed him to fly some truly remarkable airplanes such as a Hawker Sea Fury, P-51 Mustang, T-6 Texan, Stearman, DC-3, B-25 Mitchell Bomber and P-2 Neptune. He also spent a few seasons as a volunteer flying a B-17 Flying Fortress and B-24 Liberator bombers with the Collings Foundation during their “Wings of Freedom Tour.”

Quoting in part from an article entitled “Dream Weaver” that Zazas wrote in 1994 and was published in the December 1994 issue of The Southern Aviator:

“Flying is one of my most rewarding adventures, whether I strap a Boeing 767 or my venerable 1946 Luscombe 8A to my back. Each machine offers me the chance to visit and explore places “beyond the horizon.” Whereas the former demands I conform to a closely supervised and regulated environment and schedule, the latter allows me a virtually unlimited opportunity to escape within a unique blend of magic and imagination.

I love to explore and share with others this playground of magic and imagination. Stretching the fantasy a bit further, I guess I could be described as a modern-day explorer. I am intrigued by what new lands and peoples exist beyond the horizon.”

Zazas calls his restored and reconditioned Luscombe, “Carolina Canary” and with a twinkle in his eye, his “Magic Carpet to Adventure.” He flies the airplane, with limited navigational equipment, quite rudimentary by today’s standards and by using a hand-held radio, in an “old School” manner, finger on a chart. He smiles and calls this IFR (I follow roads, railways, and rivers). Although he has flown this airplane to most states in the US, he still has not gotten up to the far northeast yet. However, he has flown the beautiful yellow with black trim airplane twice to Alaska.

Zazas celebrated the 75th birthday of his airplane in an intimate and quiet manner with a few close friends and some airport staff. He had a cake made with an edible photo of the airplane in the frosting. There was a large number 75 on it and some candles. The candles were lit inside the airport terminal and Zazas backed into the propellor-wash (a friend was in the cockpit monitoring the running engine and riding the brakes) to allow the airplane to blow out its own candles.

Zazas says he has made some lifelong friendships with Carolina Canary over the years. Again, quoting from “Dream Weaver”:

“Perhaps best of all, I have joined in the comradeship of fly-ins and aviation events from Florida to Wisconsin to California to Alaska and beyond. It mattered little I had only a 65 hp engine to propel me to these adventures. Friendly chatter of airplanes old and new filled the air when our respective magic carpets were secured for the night.

My little Luscombe provides me with much freedom and pleasure. The overall experience I gain from my adventure rests with my own abilities and confidence as a pilot. I do not push my limits, nor do I demand more from my airplane than it is capable of providing. I remain respectful of the privilege to fly every time I fly.

Yes, my Luscombe is a wonderful magic carpet to adventure. The magic rests with the opportunity to fly.

Where I fly is limited only by my imagination.”

So, if you happen to be in the vicinity of the Moore County Airport in the late afternoon to early evening and hear a quiet engine in the sky and look up and see a small, yellow airplane gracefully flying by, give a wave to Jim Zazas and Carolina Canary.