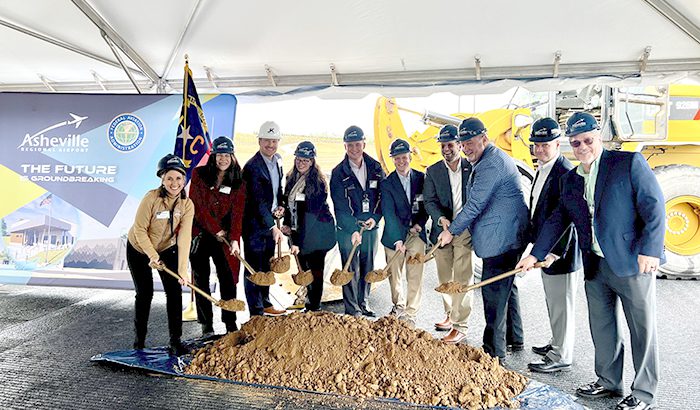 Asheville Regional Airport and the Federal Aviation Administration joined together Wednesday to break ground on a new air traffic control tower (ATCT). The new ATCT will replace the existing 62-year-old tower, which is one of the oldest in the country and is currently located within the airport terminal. The new ATCT is a $55 million project ($44 million construction and $11 million for equipment and technology) and will be located on the west side of the airport, across the runway from the airport terminal.

“It isn’t every day that an airport gets the opportunity to build an air traffic control tower,” said Lew Bleiweis, A.A.E., Greater Asheville Regional Airport (GARAA) President and CEO. “Control towers are iconic and vastly important to the nation’s aviation system – key infrastructure that allows aviation of all kinds to operate safely and efficiently. AVL needs a new tower, and this historic day is one more step toward the infrastructure growth we need to meet the swiftly growing air service needs in western North Carolina”

Also significant, the AVL ATCT is one of only two such projects nationwide that received grant funds approved by the Bipartisan Infrastructure Law. AVL received $15 million towards the project.

“Our board has spent years planning for this very day,” said Brad Galbraith, GARAA Board Chair. “Infrastructure investments are significant, long-lasting, impactful and important – and we want to get it right. I am proud to serve on a board with strategic thinkers who have the airport’s growth and impact squarely in view. What is happening here today marks a tangible step toward this airport’s future.”

When the new tower is complete, the existing tower will be demolished to make room for airport terminal expansion. The ATCT project is part of a years-long strategic plan involving significant infrastructure investment needed to manage the fast-paced growth occurring at AVL and in western North Carolina.

The new ATCT was designed by architects at Pond and Company and will be constructed by J. Kokolakis Construction. The project is slated to be complete in 2025.