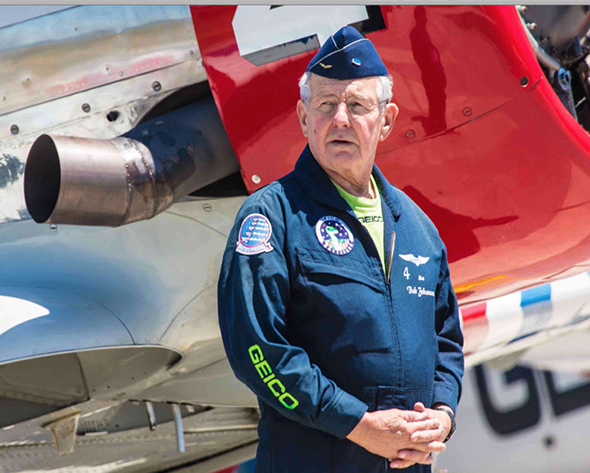 GEICO Skytyper pilot and Northport resident Bob Johansen became the latest recipient of the FAA’s Wright Brother’s Master Pilot Award at a ceremony at the Cradle of Aviation Museum on Long Island.

Johansen is the slot pilot for the GEICO Skytypers, flying the vintage WWII trainer plane called the SNJ-2 in low-altitude, close-formation demonstrations at air shows around the nation. He earned his private pilot’s license in 1958 and after graduation from Kalamazoo College in 1961 he joined the Navy and reported to Pensacola, FL, for flight training. He was later based at Quonset Point, RI, flying Grumman S2 “Tracker” anti-submarine aircraft from aircraft carriers.

After retiring from active duty in 1966, he joined TWA as a commercial pilot out of New York on international and domestic routes for 33 years. He joined the Farmingdale-based GEICO Skytypers in 1977. In addition to flying “slot” position on the airshow team, Johansen instructs formation and navigation planning for airshow cross-country trips.

The FAA issued its first Wright Brothers Master Pilot Award in 2003 and at the Cradle of Aviation Museum ceremony Friday evening Johansen became the 2,800th pilot honored in the nation.

“Johansen is a consummate airman,” said Ronald Hughes, Manager of the Farmingdale Flight Standards District Office of the FAA. “Not only does he follow the rules he knows the reason for the rules and has flown for 50 years without even scratching a wingtip.”

“It was both a surprise and an honor to receive this FAA Wright Brothers award at the Cradle of Aviation Museum,” said Johansen. “It’s as much about safety as years in flight. Our team has flown together for so many flight hours that in any given situation I know exactly how each pilot will respond and vice versa.”

In addition to presenting Johansen and his wife Beth commemorative award pins, the FAA presented the Skytyper pilot with his complete airman certification record documenting his 50-year history of safe flight.