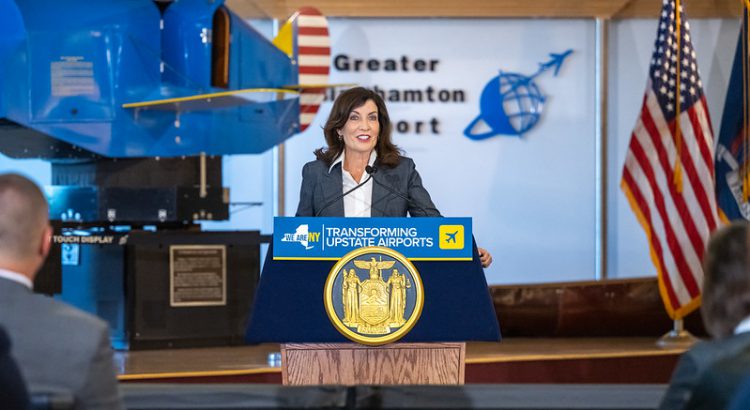 Governor Kathy Hochul recently announced that $230 million will be awarded to nine upstate airports for revitalization projects that reimagine and further modernize airports these airports. This funding comes from the Upstate Airport Economic Development and Revitalization Competition, a competitive solicitation which aims to promote, revitalize and accelerate investments in upstate commercial passenger service airports, helping to create airports for the 21st century.

“Our upstate airports are our gateways to local economies and make lasting impressions, connecting New Yorkers and tourists to the beautiful destinations that the Empire State has to offer,” Governor Hochul said. “By making critical investments to further modernize facilities across upstate New York, we are lifting upstate airports to new heights and providing a 21st century transportation experience that travelers expect and deserve.”

The Upstate Airport Economic Development and Revitalization Competition was administered by the New York State Department of Transportation and was open to upstate commercial passenger service airports and airports providing specialized service for commercial aircraft and/or corporate jets. Applicants were encouraged to apply for funding a single project or a program of projects that will help meet the demands of the 21st century. Examples of eligible activities included but were not limited to the planning, design and construction of:

Projects submitted for review by eligible airports were evaluated based on established criteria, including but not limited to innovation in design, passenger amenities and experience, operational efficiencies, and economic effectiveness for the airport’s region.

New York State Department of Transportation Commissioner Marie Therese Dominguez said, “Upstate New York’s airports are gateways that open the door for expanded opportunities in business, travel and tourism, and there is no greater advocate for investment in these facilities than Governor Kathy Hochul – because she knows that investing in aviation will bring a renewed sense of prosperity across upstate New York. As we continue to modernize our transportation network across the state, these investments will significantly improve the passenger experience and operations of facilities across the state, helping to ensure an efficient flow of people and goods, and continued economic activity across all upstate communities.”

Below are additional details on individual projects:

Albany International Airport: $60 million for the expansion of the airport’s terminal, which will provide enhanced passenger amenities pre- and post-checkpoint and more efficient passenger flow through security. Pre-check point, the project will create a modern business center for conferences and community gathering spaces to alleviate congestion. At checkpoint, the project will expand the security queue. Post-security, the project will expand the area where passengers prepare themselves for their journey, creating additional retail space, a children’s play zone, a multi-sensory calming room, and an outdoor green space. In addition, the project will improve the facility’s heating, ventilation and air-conditioning (HVAC) system, for enhanced indoor air quality and filtration.

Greater Binghamton/Edwin A Link Field Airport: $32 million to fund two projects, the first of which will entail a relocation of the General Aviation Terminal to integrate it with the Passenger Terminal, unifying both functions in one renovated facility. The project will also include the creation of a new airport canopy designed to accommodate the future installation of rainwater collection and solar panels, helping to advance New York’s ambitious climate goals. Enhancements to the ticketing lobby and outbound baggage room, the departures lobby and lounge, the baggage claim, and other multi-purpose facilities will also be implemented. The second project will construct a new, 3,000-square-foot General Aviation Customs & Border Protection facility south of the terminal, which will help the airport maintain its designation as a user fee airport.

Watertown International Airport: $28 million for the reconstruction and expansion of the airport’s 20,000-square-foot terminal, which will provide modern and comfortable facilities to passengers. The project will also improve to the TSA screening and baggage handling areas; installation of flight information displays and a visual paging system; construction of additional baggage claim space; construction of a new hold room with modern seating, charging stations, natural lighting and airfield views; and construction of flexible space for restaurant and classroom spaces available to the non-travelling public. Additionally, the project will construct a new jet bridge to accommodate additional aircraft types and improve customer boarding. To accommodate current and future airlines at the airport, the project will install of additional ticketing counters, and to the benefit of arriving passengers, the project includes installation of a dedicate rental car counter.

Saratoga County Airport: $27 million for the construction of a new, state-of-the-art, energy-efficient terminal building, with modern amenities that provide a first-class user experience and design elements that reflect the character of the region. The new building’s first floor will provide two spacious passenger waiting areas, a multi-media conference room, and a café and ice cream counter that will open onto a courtyard with outdoor access. The lobby area will feature a display area for automobiles from the Saratoga Automobile Museum, while the second floor of the building will provide space for pilots as well as a restaurant area and an exhibit area for local artists. The hangar portion of the building will be finished with aged, reclaimed wood to mirror the look of the many Saratoga County horse and agricultural barns, while a solar array on top of the hangar roof will help reduce the airport’s collective carbon footprint.

Syracuse Hancock International Airport: $20 million for two projects, the first of which will include essential upgrades to the airport’s Customs and Border Protection (CBP) Federal Inspection Station (FIS) to ensure the facility meets the latest CBP standards and preserve the airport’s international designation and ability to handle both international passengers and cargo operations. The project will also install the latest FIS equipment for international operations, allowing for the processing of 200 passengers per hour, replacement of a jet bridge, and creation of additional hold room and boarding space. The project also entails installation of a wayfinding lighting control system and support for hearing-impaired passengers. The second project will enhance and expand the North Concourse, upgrading and modernizing this portion of the terminal, which accommodates 40 percent of overall traffic. The project will add approximately 4,700 square feet to the concourse for improved passenger flow, along with additional seating areas and concession space. The design supports optimal natural ventilation for improved air quality, promotes energy efficiency with high solar reflectance index materials and dynamic window panels, and integrates sustainability measures through the use of local and recycled materials.

Sullivan County International Airport: $18.5 million to reconfigure the interior space, creating additional space for passengers, a new pilot lounge, and better views of the outdoor Catskill Mountain environment. The project will also upgrade the airport’s HVAC systems, and outfit the terminal building with improved insulation and with solar panels that will provide a sustainable source of electricity for the building. Additionally, the project will install electric vehicle charging stations in the parking area.

Ogdensburg International Airport: $18 million for the renovation and expansion of the terminal building as well as exterior improvements. The project will install innovative and energy efficient technologies, upgraded security doors and sprinklers, new passenger information display systems, and improved Wifi. It will also utilize design themes that reflect the airport’s surrounding community and character. The terminal expansion portion of the project entails the expansion of the lobby for check-in, ticketing and baggage drop; expansion of the TSA screening area; expansion of concessions space; and creation of new space for large community events. Moreover, for exterior improvements, the project will extend the entrance canopy; create an elongated curbside drop-off and pick-up area; and install solar panels and electric vehicle charging stations in the parking area.

Frederick Douglass: Greater Rochester International Airport: $18 million for two projects, the first of which includes revitalization of the terminal building to further modernize the entryway, ticketing area, and baggage claim to make it more inviting and easier to navigate. The project will enhance these areas with more natural lighting, LED fixtures, and new signage with digital wayfinding features. The project will create a new, user-friendly mobile app that integrates information about parking, concessions, flight activity, and other areas of the airport into one platform. Additionally, this project will renovate the airport’s Veterans Area, converting it into a modern gathering center with updated lighting, new furniture and display casings. In honor of the nationally recognized abolitionist Frederick Douglass, the project will create a new exterior welcome sign to promote the airport’s namesake, and will construct a new exhibit in the terminal that features Douglass’s work and legacy. The second project zeroes in on enhancements to airport operations, making HVAC enhancements and renovations to the freight building and the baggage belt. The project will also expand the canopy that adorns the front entrance of the airport and will incorporate rainwater collection into the infrastructure.

Adirondack Regional Airport: $8.5 million for revitalization of the terminal building. The project will make reconfigurations that will expand the central receiving area for improved flow of people. It will bring in LED lighting to illuminate the space and new wayfinding signage for easier navigation to the gate, the café and the parking facility. Post-security, the area will be reconfigured to provide additional space for passengers and an outer wall with large windows will be constructed, bringing in more natural light and providing a view of the airfield and the surrounding Adirondack peaks. Additionally, the project entails relocation and expansion of the café and various HVAC enhancements.

Grants from the Upstate Airport Economic Development and Revitalization Initiative complement New York’s continued investments in airports across the state made through the Aviation Capital Investment Program. In October 2021, Governor Hochul announced that $20.7 million was awarded through this program for strategic infrastructure enhancements at 24 public-use airports. Administered by NYSDOT, projects funded through the Aviation Capital Investment Program include the construction of new security and access control improvements, deployment of new automated weather monitoring systems, and the construction and rehabilitation of new and existing hangars and aircraft refueling facilities. These investments will make the surrounding communities more economically competitive with neighboring states and NYSDOT remains committed to working with local project sponsors to expedite the delivery of these improvements.

State Senator Tim Kennedy said, “Through this investment, New York is both modernizing our airports and increasing accessibility and efficiency, ultimately streamlining the traveling process for visitors who pass through these upstate hubs. Governor Hochul continues to demonstrate a clear commitment to the enhancement of our transportation sectors, and this $230 million pledge is yet another example of a collective vision focused on revitalizing key transit corridors.”