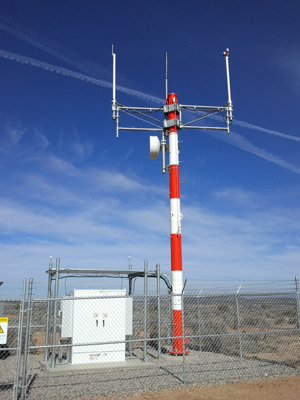 Pilots flying in and out of Navajo Lake Airport in Navajo Dam, New Mexico will now be able to take advantage of Colorado’s Wide Area Multilateration (WAM), which began initial operations in Colorado on September 12, 2009. According to Ronald B. Keller, Aviation Safety & Education Administrator, New Mexico Department of Transportation -Aviation Division, a multilateration remote unit (MRU)was built for the Navajo Dam airport.  It is part of the ADS-B system and is fed into Denver Center to enable controllers to see ADS-B equipped aircraft in areas of poor RADAR coverage. "That means a GA aircraft equipped with ADS-B will be able to get WX, NOTAMs, TFRs, etc. before takeoff from Navajo Lake Airport," said Keller.

This potentially opens the door for airports in other states to see these deployments as well. In addition to providing surveillance data, it will also uplink data to general aviation pilots via 978MHz UAT for FIS-B and TIS-B. To speed up the deployment of ADS-B avionics, the FAA has waived some requirements to make installations easier.

Keller said that according to an airspace & procedures person at Denver Center, controllers expect coverage down to 9000’. Navajo Lake Airport is part of the Durango, Colorado constellation and it should be operational next spring. At least some, if not all of the remote units will also provide TIS-B and FIS-B services to the general aviation pilots. Pilots in NE Arizona and SE Utah may be able to receive these services if they are close enough to a WAM constellation. Montrose, Co. is operational as per NOTAM for the surveillance function now and should offer other services next year.