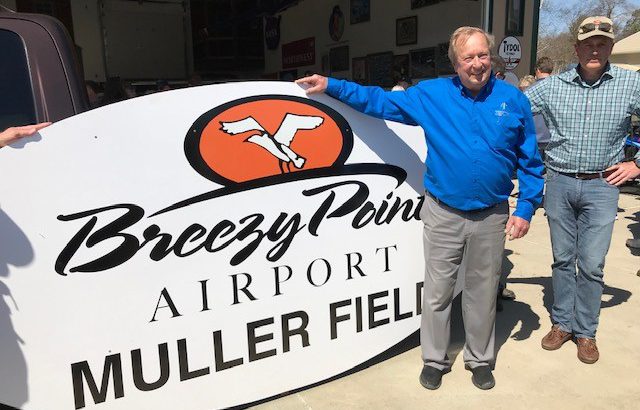 May 4th marked a historic moment at the Breezy Point Airport in the City of Breezy Point Minnesota.  Executives of the airfield renamed the airport, which has been at the city’s center since the early 1920’s, after longtime airport manager and Vietnam Veteran Cliff Muller.  Muller has lived on the field for 20 years and has spent the last two decades caring for and managing the field.

A Vietnam veteran with the 1st Airborne, a Purple Heart, Bronze Star and Air Medal recipient, Muller was drawn to Breezy Point and the airport through his love for flying and dedication to the industry.  Muller currently lives on the airport’s edges in a refurbished hangar and spends his time tending to the property while fueling his love for aviation.  An airborne infantryman, dedicated pilot and historian of military plans and memorabilia, Muller has refurbished a WWII Stinson 10-A airplane called a L-9B that was built in 1941 and then rebuilt in 2011.

“His service to country and the tremendous efforts he has put towards this airport are the catalyst to this significant renaming,” said Jeff Smith, President Breezy Point Airport at Muller Field.  “Cliff has been the mainstay of this airport for two decades, we already knew it was Muller field, we just needed to make it official”

Not since O’Hare airport was renamed in 1949 after Butch O’Hare a WWII veteran, has an airport been named after a military serviceman.

“I am honored and totally surprised at this honor, I appreciate it and know that it couldn’t’ have been possible without the communities support over the past years,” said Cliff Muller.

Breezy Point Airport has a rich 55-year history.  Farmland purchased in 1965 by the Breezy Point Resort eventually became a unique part of Breezy Point, Minnesota when it was developed into a strip of farm land that became a 2,600-foot lighted airstrip.  Today marked the fifth annual Airport Days at Breezy Point where hundreds of people enjoyed an airshow, aircraft displays, emergency vehicle and medi-Vac helicopter, car collector show and more.