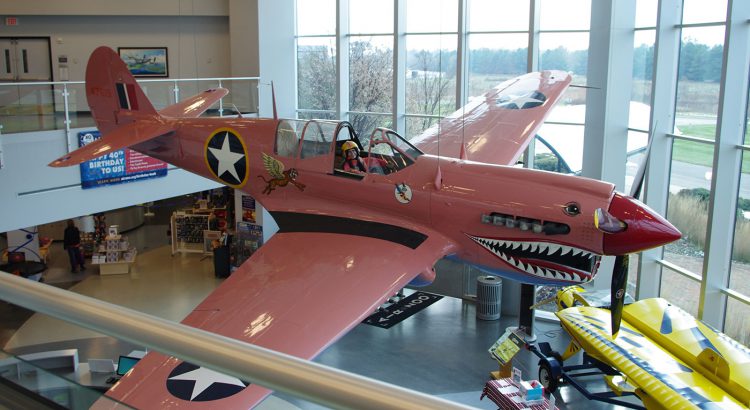 Photos and Article by Kenn Potts

On November 18, 1979, founders Pete and Sue Parish opened the Kalamazoo Aviation History Museum known as the Air Zoo with nine aircraft. The name “Air Zoo” comes from the animal names of four of the aircraft in the collection which included the Wildcat, Hellcat, Bearcat, and the Flying Tiger. The Air Zoo located in Portage, Michigan celebrated its 40th Anniversary in 2019 with several events.

The original Air Zoo facility went thru several expansions and then constructed a more than 100,000 square foot facility that opened in 2005. The original Air Zoo is now known as the Flight Discovery Center and the new building is the Flight Innovation Center. The Air Zoo is a world-class, Smithsonian-affiliated aerospace and science museum with over 100 rare and unique aircraft and spacecraft, inspiring interactive exhibits, full-motion flight simulators, indoor amusement park rides and hands-on, science-based camps and classes.

The Air Zoo continues to tell significant World War II stories through the 1940s aircraft displays and exhibits focused on the Guadalcanal campaign, WASPs, black fighter pilots, and the Doolittle Raid. The Air Zoo has also expanded the story to include Early Flight, the Golden Age of Flight, the Cold War/Jet Age, and Space. Amusement park-style rides send children’s imaginations soaring in the Flight Innovation Center, and an array of simulators give guests a wide variety of flight experiences.

Over 100,000 artifacts and archives help to tell a myriad of stories about aerospace heritage and innovation. From that small hangar that opened in 1979, they have grown to provide visitors with more than 100,000 square feet of combined exploration, education, and exhibition space. The once modest displays now include such heavies as the world’s only SR-71 (B-Model) Blackbird (shown at left). The Air Zoo’s STEAM-based education programs ignite imaginations while the exhibitions, including industry-leading, international travelling shows, offer engaging experiences to visitors of all ages and learning styles. Historic aircraft are given a new lease on life through restoration on public view in the renowned Flight Discovery Center.

One of the first 40th anniversary events opened on April 12 with an exhibit named Memories and Milestones: 40 years of the Air Zoo. This exhibit displayed the history and milestones of the Air Zoo, stories and recollections from members, donors, and aviation enthusiasts. In June, an exhibit of the 75th anniversary of the D-Day invasion was opened. The Yankee Air Museum B-17 “Yankee Lady” provided tours and rides. September hosted a fly-in weekend. Guests were able to meet pilots and experience an open house of flyable aircraft. It included the Yankee Air Force B-25D Mitchell bomber.

From October 3rd to 6th, a Spy-Posium was held. The cockpit of the SR-71B blackbird was opened for viewing. Several crew members of the SR-71B spent time discussing their experiences. Later in October, the Air Zoo hosted an Ice Cream Challenge. Guests voted for the best ice cream flavor which was frozen by liquid nitrogen.

The birthday bash events were held from November 15 to November 18, 2019. On Saturday and Sunday, the admission price was discounted by 40%. On November 17, a Member Appreciation Hour was held with free coffee, juice and donuts.

The City of Portage proclaimed an official “Air Zoo Day” of November 18, 2019 by resolution. The Air Zoo had free admission to all areas and attractions as well as drawings for prizes. A Cake Chat was held on its birthday day that had a few of the many people involved in the beginning of the Air Zoo. The panel members discussed their favorite memories of the Air Zoo over birthday cake.