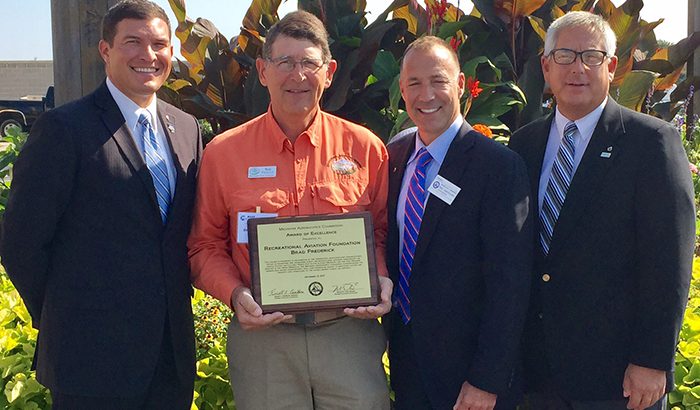 At its meeting recently in Escanaba, the Michigan Aeronautics Commission (MAC) presented its Award of Excellence to Capt. Dave Powell and to Brad Frederick/Recreational Aviation Foundation (RAF).

Capt. Dave Powell is the Western Michigan University (WMU) College of Aviation dean in Battle Creek. Powell was recognized for his outstanding contributions to aviation education through his leadership at WMU. Under his leadership, enrollment continues to grow, aircraft and labs are technologically advanced, and graduates are career-ready professionals in the field of aviation. The MAC salutes his commitment to WMU and the advancement of aviation education that has produced outstanding professionals who are highly sought after worldwide.

Brad Frederick is a member of the MAC General Aviation Advisory Committee and serves on the Michigan Department of Natural Resources (DNR) Advisory Panel. He also is the Michigan liaison for the Recreational Aviation Foundation, an organization dedicated to preserving existing airstrips and creating new public-use recreational airstrips. Frederick and RAF were recognized for the tremendous dedication and organizational effort in preserving and developing public-use recreational airstrips throughout the United States, particularly North Fox Island in Lake Michigan and the Two Hearted Airstrip in the Upper Peninsula. MAC acknowledged the remarkable effort, perseverance, skill, and knowledge needed to negotiate access and preserve safe operations at the state’s newest public-use airports.

Every year since 1990, the MAC has recognized individuals and organizations whose innovative contributions have significantly improved facilities, operations or public relations for aviation in Michigan. The MAC provides general supervision of aeronautics within Michigan.