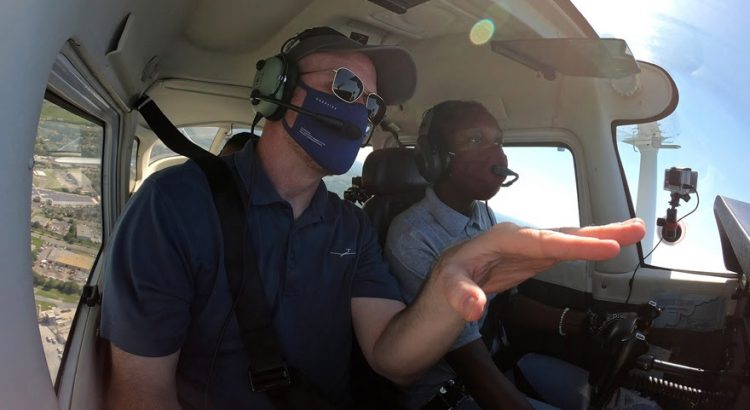 The Aircraft Owners and Pilots Association Foundation High School Aviation STEM Curriculum has seen phenomenal growth in the five years since educators across the country began using it to teach students about aviation. That growth is showcased in a recent special report by Education Week, one of America’s most trusted resources for education news and information on grades K through 12, reaching more than 1.6 million professional educators nationwide.

The AOPA Foundation curriculum now being taught in more than 300 schools in 44 states was previously featured by ABC News in 2020, and now figures prominently in an Education Week special report that includes stories about teaching students to become adept problem-solvers. AOPA’s curriculum is the subject of a story by Assistant Managing Editor Kevin Bushweller, who spent time (along with Education Week photographer Jaclyn Borowski and videographer Ryan Collerd) with students at Col. Zadok Magruder High School in Rockville, Maryland. Borowski produced a video that shines more positive light on the program.

The special report also included a video interview with former Southwest Airlines pilot Tammie Jo Shults, who wrote a book about her experience leading a successful problem-solving effort that ended with the safe landing of a Boeing 737 after one engine exploded causing damage that depressurized the cabin at 32,000 feet. Shults talked to Bushweller about the role of aviation in her personal and professional growth, and how the problem-solving skills learned by pilots can be applied much more broadly in life.

Bushweller’s feature showcasing the AOPA Foundation-funded curriculum in action focuses on how the aviation-themed science, technology, engineering, and math lessons help students become better problem-solvers while preparing them for careers flying, maintaining aircraft, or in other roles supporting aircraft operations (crewed or otherwise). Bushweller also joined a class visit to Montgomery County Airpark in nearby Gaithersburg, Maryland, which supports Magruder High School’s implementation of the AOPA curriculum, for presentations about the aviation industry and a chance to hop aboard a Cirrus SF50 Vision Jet. The students spoke with career pilots, CFIs, and female aviation mechanics about what it’s like to work in a male-dominated industry.

Bushweller also spent time on classroom observation and heard from the students how the curriculum is directly impacting their future. Senior Ayman Bustillos, who plans to study aerospace engineering at Embry-Riddle Aeronautical University, told Bushweller that an assignment to investigate an aircraft crash was among the most “powerful and memorable problem-solving lessons he learned, [a lesson that] ‘helped me in my decision to become an aerospace engineer.'”

AOPA is proud of the fact that the makeup of the students in the curriculum is far more diverse than the current pilot population and aviation workforce: Forty percent of the participants in the program are students of color and 21 percent are female.

In the video interview, Shults described her experience in the aviation industry and her advice to the next generation looking to follow in her footsteps.

“I’ve spent the last couple of years on a women’s advisory board to the FAA and just looking at some of the reasons that we don’t have very many women in aviation,” Shults said in the video. “AOPA has done this amazing bridge so that anyone can know not only more about aviation, but the practical, logical steps of how do you get into this industry.”

There has never been a better time than now for students interested in pursuing a career in the aviation industry. “The surge in interest is fueled largely by growing opportunities in the airline industry, which faces massive shortages of pilots, mechanics, and other jobs due to retirements and the domestic and international expansion strategies of many airlines,” Bushweller wrote.

And the airlines are also on board with the work AOPA is doing to prepare students for their ranks. Education Week spoke with Brad Morrison, manager of pilot recruiting and development for American Airlines.

“‘What I tell kids now,’ Morrison said, ‘is this is how I wish the industry would have been 20 years ago’ when he was thinking of pursuing a career as a pilot. There are way more opportunities now to enter the airline industry in a variety of careers and get promoted quickly, he said.”