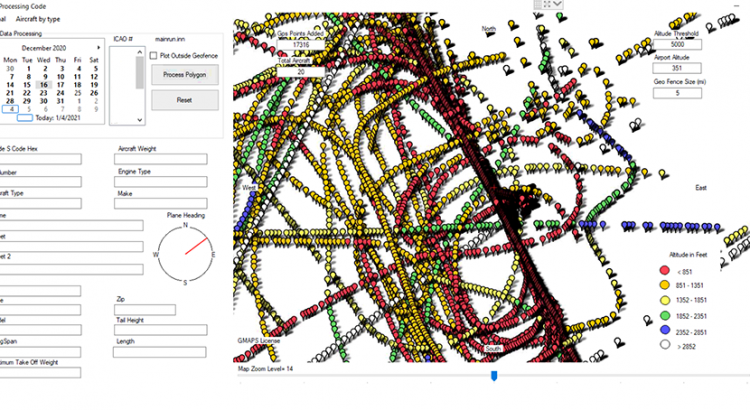 Invisible Intelligence, LLC and the Maine Department of Transportation, recently completed installation, testing and implementation of a statewide network of their signature product, the G.A.R.D. system with ADS-B tracking. The network consists of the system being deployed to the 33 NPIAS airports throughout Maine. This level of deployment is the first of its kind in the nation. Transportation agencies can now capture critical aircraft data, for use in aviation system planning with the recently released G.A.R.D.- Dashboard ADS-B technology. Invisible Intelligence has provided a tool to assist the MaineDOT in its goal to provide accurate aircraft counts to the airports and the FAA. Gone are the days of guesstimating aircraft operations and critical aircraft usage.

“We live in a data driven world, it is only logical that we use accurate aircraft usage data to design our airports,” said Ron Cote, Co-Owner at Invisible Intelligence. Since 2012, Invisible Intelligence has become the national leader in aviation operation count software. The company offers a wide range of products and services designed to assist general aviation airports. The G.A.R.D. system provides operation counts through the use of audio recordings of the pilots utilizing the individual airports.

The system was originally created to provide airports with actual audio recordings to be used for safety training and accident investigation, but it was soon discovered they could be used to determine operation counts as well with over 90% accuracy. The most recent technology that Invisible Intelligence has taken advantage of is ADS-B.  With ADS-B inclusion, operations count accuracy will not only be increased, but airports and states will now be able to know the actual aircraft using the airport. Knowing which aircraft use the airport will aid in generating the most reliable determination of critical aircraft needed by the airport to define the correct FAA design standards to use. The ADS-B data will also allow the airports to determine the origin of the incoming flights, thereby aiding municipalities in knowing their customers. For those airports with multiple runways, the G.A.R.D. with ADS-B tracking system will also allow airports to track individual runway usage by using the geofencing technology installed in the new software.

With regards to transportation agencies, the new system comes with the G.A.R.D. Check system. This allows the agency to monitor each system that has been deployed, gather daily operations counts, give a sense of aircraft with ADS-B and ensuring the systems are working properly (notification of a nightly backup).

“Our agency has wanted to be able to get accurate operations counts at our NPIAS airports for a number of years now” stated Tim LeSiege the Aviation Engineer at the Maine Department of Transportation.  “In the past, we had the original G.A.R.D. system deployed at just over half of our NPIAS airports and would receive only monthly reports of operations. The original system didn’t have the G.A.R.D Check technology. This is one of the many reasons we upgraded and did a statewide deployment. We are now able to monitor the system each morning and can see operations counts for each of our airports because the new systems upload summary data nightly to our Department.”