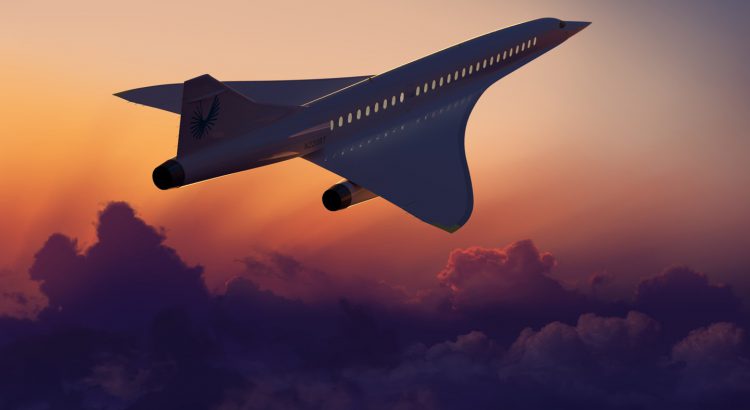 Governor Laura Kelly and Kansas Department of Transportation Secretary Julie Lorenz announced this week that KDOT and the Federal Aviation Administration (FAA) have finalized an agreement to establish the Kansas Supersonic Transportation Corridor (SSTC) for use in testing non-military aircraft that fly faster than the speed of sound (“mach” speed).

“To be able to deliver this new opportunity for our country is yet another example of Kansas cementing its reputation as a national leader in the aviation industry,” Governor Kelly said. “This high-altitude flight corridor gives Kansas a strategic advantage in attracting companies involved in the development of supersonic aircraft, and will play a significant role in our state’s ability to encourage economic development as we recover from the COVID-19 pandemic.”

KDOT Secretary Lorenz, who chairs the Aviation Committee for AASHTO (American Association of State Highway and Transportation Officials), commended the collaborative efforts resulting in Kansas securing the SSTC. She acknowledged Kansas Senator Jerry Moran’s involvement in the process in coordination with the FAA, NASA, the Air Route Traffic Control Center and the National Institute of Aviation Research at Wichita State University.

Senator Moran said industry forecasts show a market for as many as 300 sophisticated supersonic aircraft over a 10-year period, representing as much as $40 billion in revenue and requiring a “deep bench of skilled manufacturing talent.”

“This year marks 73 years since Chuck Yeager broke the sound barrier, and with this supersonic flight corridor Kansas will have a unique role in the next generation of supersonic transportation,” Senator Moran said.

The Kansas SSTC is a 770-nautical-mile racetrack-shaped corridor at or above an altitude of 39,000 feet. The FAA’s Kansas City Air Route Traffic Control Center assessed this route to protect the safety and efficiency of the National Airspace system. This corridor is entirely in federal airspace above Kansas, running the length of the state, just north of the Kansas-Oklahoma border. The route will support sustained flight up to Mach 3 and is within reach of numerous airports equipped to provide fuel, ground and technical support.

Bob Brock, KDOT Director of Aviation, said the SSTC gives innovators like Boeing, Lockheed Martin, Aerion, Spike and Boom Aerospace the airspace necessary to test aircraft designs that reduce the impact of sound on nearby communities. Brock said the Kansas supersonic corridor also offers logistical advantages by being the first and only such commercial supersonic flight test route in the nation’s interior.

“I’m really excited about quiet supersonic technology and its ability to be transformative for flight and our economy,” said Jim Bridenstine, Administrator of NASA.

Bridenstine said NASA is working with industry to build supersonic aircraft with “low-boom” or “no boom” flight characteristics.

To provide safety margins for these operations, the KDOT Division of Aviation, FAA Central Region, Air Route Traffic Control Center and Lemasters Group Consulting wrote new procedures for operators. Aircraft will only enter the SSTC at specific points and will be required to clear flight routes prior to takeoff. The SSTC is located in generally low-volume airspace, which will minimize any effect on existing flight routes and airports.

KDOT has partnered with Wichita State University’s National Institute of Aviation Research (NIAR) to collect noise data and live telemetry from the aircraft that will be used by both the FAA and aircraft manufacturers to evaluate performance.

“We help manufacturers refine aircraft designs every day and flight tests are one of our core strengths,” said Dr. John Tomblin, WSU Senior Vice President for Industry and Defense Programs and NIAR Executive Director. “This partnership with KDOT provides a sophisticated and cost-effective flight test capability within reach of every major aircraft manufacturer in the country.”

The FAA recently proposed a new rule that modernizes the procedure for requesting special flight authorizations to operate at supersonic speeds over the United States. Kansas state officials are hopeful data from the Kansas corridor will help policymakers and the FAA make informed rulings on issues that will drive the future of the aviation industry.

Kansas has consistently served in a leadership role for the aviation industry. Research efforts such as these may shape the future of air travel in ways that both reduce impact on the environment and facilitate global travel in a far more efficient and affordable manner.

“This flight test corridor will be used to find the right balance between creating new manufacturing jobs and protecting our environment by testing new technologies like synthetic jet fuel, low-boom and ‘boomless cruise’ flight,” said Brock. “Robust flight test and telemetry-collection facilities are now coupled with community outreach and education programming.  This statewide architecture will deliver objective real-time data to both manufactures and FAA as necessary to advance this sector of advanced air mobility.”