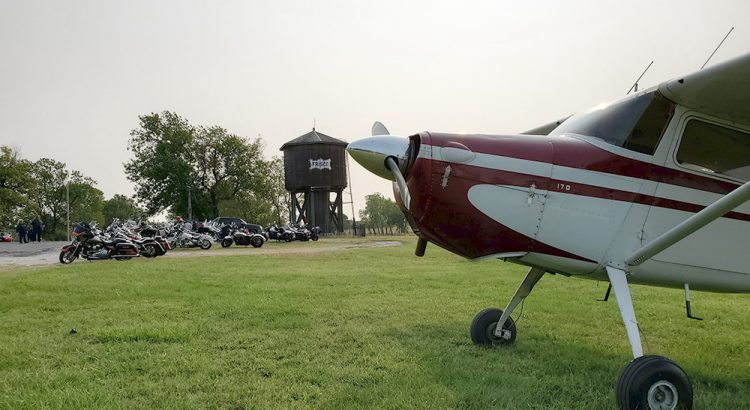 I’ve been flying a long time, but I can’t remember ever having to stop my airplane at a stop sign on a city street. But that is exactly what happened on a trip that my wife Kelly and I recently made to Kansas.

Owning and flying a 1950 Cessna 170A has allowed us to explore some short grass strips that were previously unsuitable for the type aircraft we were flying. As I often do, I was playing around on some online aviation sites one day and happened across a place called The Beaumont Hotel.

Located in the tiny town of Beaumont, Kansas, the Beaumont Hotel is a weekend favorite for local pilots – and bikers – who come there for breakfast at the well-known restaurant located in the hotel. A little further investigation revealed a 2400’ grass strip located on the East side of town… and that’s where the fun begins. It turns out, after landing, arriving aircraft simply turn right at the south end of the runway and make a quarter mile taxi right up to Main street. After stopping at the aforementioned stop sign, you can park your airplane in the grass just across the street from the hotel.

So, with beautiful weather forecasted for the weekend of Sept. 19-20, we made our reservations, loaded up the airplane and headed Northwest for the 2 ½ hour flight from central Arkansas. Perfectly clear skies, light winds and cool temperatures made for a very uneventful, but pleasant, flight. After crossing over the Ozark mountains of Northwest Arkansas, the terrain soon gave way to flat farmland and we knew we were getting close to our destination.

Winds at Beaumont dictated the use of runway 18 and after touching down and rolling out, we turned right and headed up the hill. Drawing near the hotel, you will notice a wooden water tower on the left – a reminder that Beaumont was once an important railroad point on the cattle drives going north from Texas and Oklahoma. Immediately under the water tower is a 1949 Twin Beech D18S that once belonged to Barry Seal. Seal, as you remember, was the subject of the movie “American Made” starring Tom Cruise as Mr. Seal.

Having parked the airplane, we made our way across the street (no need to check for traffic…not a car in sight) and entered the lobby of the hotel. At this point I should probably make it clear that if you are expecting the Ritz Carlton, you will be sadly disappointed. Don’t get me wrong; the hotel is certainly adequate and hearkens back to days-gone-by with a very “homey” feel to it. I guess the best way to describe it is to say it smells like “grandma’s house” and that’s a good thing. There is no check-in counter and the hostess does double duty behind the cash register in the adjacent restaurant. While nothing fancy, we found the room to be sufficiently appointed, clean and comfortable.

The restaurant is small, somewhat crowded and provides food that is the “stick-to-your-ribs” kind that you would expect in a small-town restaurant in the farmland of Kansas. More to the point… it’s good. Really good.

It just so happened, the weekend we were there, the city was having a street dance featuring a local country and western (of course) band. Closing Main street wasn’t difficult, as we didn’t see a single car pass down the street the entire duration of our stay. A flatbed trailer provided the stage, the hotel provided the food and drinks and The Matt Engle Band provided the music for what turned out to be a really good time. A cool Kansas evening necessitated a fire in the firepit and we sat at a picnic table in the middle of Main street, enjoying the band and watching the locals do the Two Step in the street. Cowboy hats and boots were plentiful and a good time was had by all. After a couple hours, we called it a night, and headed upstairs to the room.

Sunday morning, we awoke to the rumbling sound of motorcycles as several groups arrived for the breakfast at the restaurant. Much like the night before, the meal was real downhome cooking – no quiche on the menu here. Eggs, sausage, fried potatoes, biscuits and plenty of gravy made a quick recalculation of our weight and balance necessary. After eating we loaded up the airplane and talked to several of the bikers who wandered over to look at the plane and ask questions about our trip.  I’m always happy to discuss flying with anyone who will listen – and even some who won’t.

All good things must come to an end, and we fired the plane up and began a slow taxi through a crowd of motorcycles and people who were filming our departure. A few hours later, we touched down back at home with a new experience under our belts – one that we will certainly do again in the future.