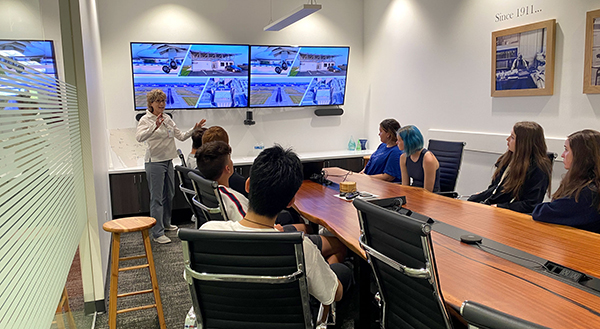 Photo above – Dr. Muia shares her enthusiasm for the opportunities in aviation planning at her Woolpert office to students considering aviation careers. (Courtesy photograph)

Maria Muia is a Senior Aviation Planner and Aviation Research Scientist with Woolpert, based in Indianapolis. Woolpert has been in business for more than a century. In 1911, Charlton Putnam and Ralph L. Woolpert founded the Dayton, Ohio, engineering and surveying firm. Through the decades, Woolpert has expanded services to meet the growing needs of clients. Environmental and sanitary engineering, city, and regional planning, photogrammetry, airport planning and design, traffic engineering, landscape architecture, environmental sciences, architecture and geospatial services are provided. As their corporate family grew, Woolpert became an international AEG firm of more than 1,900 talented professionals, serving clients on a local, regional, national, and international basis from over 60 offices on four continents. Woolpert’s ability to continually adapt to changing times and provide an increasing range of professional services is the basis for their service-oriented culture. Learn more at www.Woolpert.com

What’s your first memory of aviation?

That would be my dad. He would get dressed for work in this black suit with a hat that had an emblem with wings on it, which he hated to wear because it messed up his hair. He had a white shirt with bars on his shoulders. I didn’t understand what he did, just that he was gone for days at a time. The whole family would pile in and drive to the airport to take him to work or pick him up because we only had one car. I really didn’t think too much of it, going to the airport. We did it all the time. And with flight benefits from his airline, we flew all the time. I was often the only one in the class who would raise their hand when the teacher asked if anyone had ever been on an airplane. Now flying is common place, but it hasn’t always been that way.

Who has inspired you the most (any mentors you want to mention?)

My mother has been and will always be the inspiration and source of anything I am successful at or anything that is good in me. She was adventurous, brave, supportive, loving, kind, generous, and she was always my champion. Everyone needs a champion. If you are lucky, you get a parent, or maybe even two, who are supportive and encouraging. But, if you are really lucky, you get one who is your champion. My mom was mine. I can think of no other better mother in the world. She was my backer, my booster, my proponent, my protagonist. She told me I could do anything, and she raised me to be smart enough to believe her.

Advice for other women inside our industry or thinking about aviation and aerospace?

Take flight lessons and get your pilot certificate. If you can, get your instrument rating. Obviously those would be just two steps in the process to becoming an airline pilot, but if you don’t want to be a pilot, they will be useful for any job you might be interested in within the industry. These two skills have made a big difference in my career as a consultant. Understanding the fundamentals of flight and using the system to its fullest utility, makes you proficient in advising others on the system. You will understand how an aircraft flies, why it flies. It will teach you what it is like to use the system. It will introduce you to airports and how they work. It will introduce you first-hand to air traffic controllers, the FAA, other pilots, and jobs at an airport. You will understand what works well in the system and what doesn’t. You can’t get this kind of insight in a class, out of a book, or from a YouTube video. Actually fighting your way through a turbulent, crosswind landing or shooting an instrument approach to minimums at an alternate airport after you have missed twice at your destination airport due to low visibility and now you are low on fuel – this gives you experience and knowledge that you will draw upon throughout your whole career.

Additional Background? (During your early years with fewer women in aviation, how did you navigate?)

How did I navigate my early career? Carefully, confidently, and professionally. I was careful about who I trusted in and what I revealed. When I didn’t know what I was doing, I approached the task carefully and asked for help only from those I learned to trust. I researched, studied, and practiced whatever the task was so when I was asked to perform, I was confident. And I was always professional. In the work place, how you carry yourself, your attitude toward your work and others, and how you communicate all define your reputation, and you only get one reputation. If you want it to be a good one and you want to be taken seriously, you need to act professionally. Being professional at work allows you to leave a positive first impression, create successful interpersonal relationships, and ensure a good reputation within your industry.

Author’s note: I would add that Dr. Muia has a very good sense of humor, too. Her nickname is M2 (Maria Muia) which she earned early in her career as a scientist. Maria Muia began flying at age 15 at McDonald’s Field, a grass strip between two cornfields in Morgan County, Indiana, marked on the aeronautical chart as “hazardous.” She graduated from Indiana State University with a B.S. in Aviation Administration. She is a private pilot with an instrument rating and advanced instrument ground instructor training. She received her Master’s and Doctoral degrees in Management and has taught many courses as an adjunct professor in the field of aviation. Muia has served in both the private and public sectors, including ten years as the Manager of INDOT’s Aeronautics Section. Maria has landed at every public airport in Indiana and served on the board of directors for AAI and the AAI Scholarship fund. She is the recipient of the Aviation Association of Indiana President’s Special Recognition Award in 1997, 2003, and again in 2005.