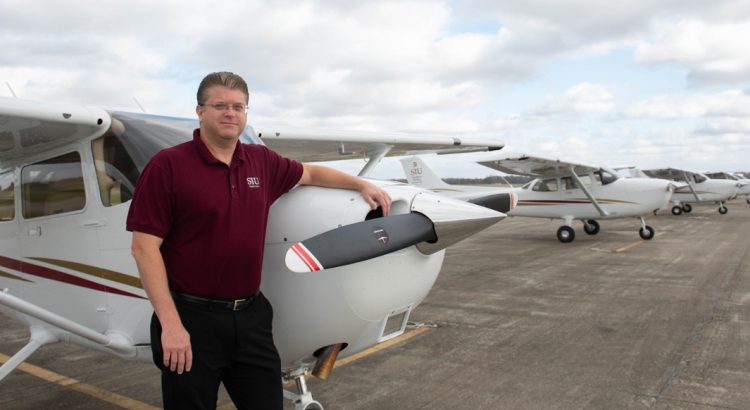 Photo above – Michael Burgener, SIU Aviation program’s interim chair in aviation management and flight and aviation technologies chair, is with the five new Cessna 172S flight training airplanes that arrived Nov. 5. The program now has 38 available planes for students to train on as enrollment this fall is at 612 students, including 150 freshmen.

The program gained five new Cessna 172S flight training airplanes Thursday night, Nov. 5. The planes, each with state-of-the-industry technology, were already in use by students on Friday. The program now has 38 available planes for students to train on, Ken Bro, the program’s chief flight instructor, said.

“These planes could not come at a better time,” said Michael Burgener, the program’s interim department chair in aviation management and flight and aviation technologies chair. “With the large increase in aviation flight students this semester, our current fleet is experiencing high utilization. During busier flight blocks, there have been aircraft shortages. These new aircraft will help to alleviate that problem as well as provide students the latest technological advancements in flight training.”

The aircraft are financed entirely by student aviation flight fees, the same funds used to pay for maintenance upgrades and fuel.

“The demand for our program has skyrocketed in recent years,” Bro said. “Our freshman class was 150 students this year and looks to be as large next fall. With that in mind, we’re increasing our fleet to increase our capacity, and we are also looking at scheduling options to increase aircraft availability.”

With a glass cockpit that resembles a video game, the planes have several improved features even from other advanced flight decks on those bought in 2018, Bro said.

“The full autopilot allows students to learn the automation characteristics common on commercial aircraft,” he said. “They also have a safety system that will right the aircraft if it is inadvertently put into an unusual flight attitude.

“This system is a new technology that greatly improves the safety through flight envelope protection.”

The new aircraft will allow flight instructors to start training primary-level students in advanced flight decks, Bro said. This means that students’ first flights may be in these new aircraft.

“This dramatically shifts the nature of their flight training and the way we’ve taught for 60 years,” he said.

Thousands of pilots will have their solo flights in these planes with students also earning their ratings. Because these aircraft will be in the program for many years, each plane will “have a special meaning to many pilots – there’s a great connection between pilots and their planes,” Bro said.