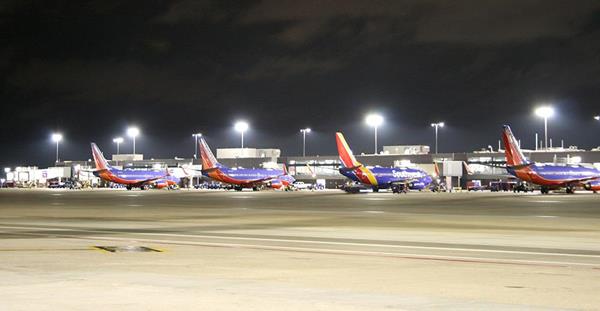 Bright Light Systems in partnership with The Jon Smith Group (JSG) have upgraded the high-mast lights illuminating the aircraft parking apron to Nova HM Series LED lights that provide superior lighting quality and distribution with a rated lifetime of more than ten years. The new LED lights offer more than 50% less energy consumption than the previous 1000-watt high pressure sodium lighting system. More than 750 energy-saving LED lights are now installed on 80-foot poles across concourses T, A, B, C, D, and E, providing enhanced safety for pilots, ground personnel, and baggage handlers around the aircraft and throughout the ramp area. The new LED lighting will enhance nighttime operations with higher illuminance levels and better light coverage on the apron while reducing lamp replacement and maintenance costs.

“The new LED lights from Bright Light Systems provide greater visibility and safety for our employees working around the aircraft while generating important operational savings for the airport,” said Monique Richard, ATL Station Manager for Southwest Airlines. “The maintenance and energy savings along with improved lighting levels in the ramp area is a win-win situation for both Southwest Airlines and the Atlanta airport.”

“As a local Atlanta manufacturer, we are proud to collaborate with the world’s busiest airport on this lighting retrofit,” said Brad Lurie, President and CEO of Bright Light Systems. “Southwest Airlines along with the other carriers understand how important safety is at the airport, and the ramp lighting is a big part of that equation. The enhanced visibility of ground personnel along with reduced glare for pilots will help to make Hartsfield-Jackson one of the safest airports in the world.”

“Bright Light Systems was very professional and easy to work with on the installation of the new lighting at the airport. The Nova Series LED lights are much brighter and a huge improvement over the old HPS lighting. The lights are also simple to install and a breeze to wire up,” said David Harrup, Project Manager, The Jon Smith Group.