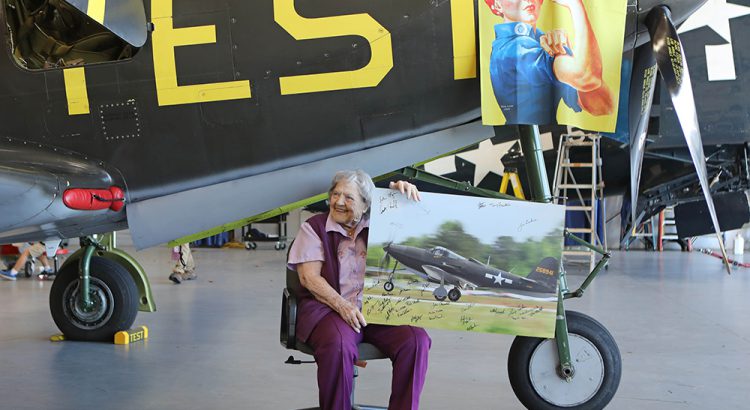 Bishop was the only woman on a team of 21 men and the only person with a hand small enough to shim struts through a small hole in the wing. The women who worked in factories on the home-front while many male soldiers were fighting overseas are known as “Rosie the Riveter.”

It was discovered that Bishop had actually worked on the exact P-63 aircraft that is now operated by the Dixie Wing, located in Peachtree City, Georgia. Bishop, who lives in Florida, traveled to the Dixie Wing for the dedication ceremony. At the ceremony a prominent inscription “Miss Betty” was revealed on the nose of the aircraft. Leadership thanked Bishop for her service to her country as well as her dedication to supporting the Commemorative Air Force Dixie Wing.

Betty graduated high school in 1943 and, after waiting a couple months until she turned 18, took a bus to Nigara Falls. Her close friend, Anne McKown, was already employed at the Bell Aircraft facility in Niagara Falls.  After Betty’s application, acceptance and orientation, she was initially assigned to Dept. 53 which was the assembly area for the P-39 Airacobra.  Betty was given the job of fitting the “belly cowls” to the under section of the P-39.  This was done by filing, shaping, fitting, and attaching the cowls.  She recalls that she was not meant to be a “body man” and wasted more material than she used.

Betty was later transferred to Dept. 63 where she worked on the P-63 Kingcobra.  During her time in Dept. 63, Betty worked on the landing gear and was the only women on the team with 21 men.  They were in desperate need of Betty as her hand was the only one small enough to shim the struts through the small hole in the wing.  Betty was also responsible for bleeding and securing the brakes.  As the war started to wind down and sales of the P-63 to Russia came to a halt, she was transferred to pre-flight where she fitted armor to the entire P-39 so they could be used as target planes.  During her time at the factory, she acquired the nickname “Bunny” as she was always hopping from one thing to another.

In recalling her nickname she also recalls some of the more humorous events at the factory.  While in Dept. 53, many workers had a tendency to ignore the rule stating that a chuck key was required to remove a bid from the drill.  Betty recalls that it was easier to remove it by bumping it against the catwalk.  Unfortunately, in utilizing this action to remove a bit from the drill she also accidentally drove a splinter into her finger underneath her finger nail.  The splinter went halfway into her finger and it is the first time she recalls ever passing out.  Betty also carries a reminder on one of her toes from a mishap with one of the oxygen tanks used to bleed the brakes on the P-63.  These tanks weighed in at around 100 lbs each and Betty’s foot happened to be under one of these tanks when it slipped from the dolly on one instance.  During her time in pre-flight, she recalls the reason for her nickname coming in handy on more than one occasion.  Since the planes were on the ground in pre-flight their work required a lot of dodging in and out.  On one occasion, Betty remembers that she did not quite live up to her nickname when trying to dodge an aileron and still bears that scar on her nose.  Betty is rather proud her scars as she says they remind her of a young and exciting life.

At the end of the war, Betty realized that her lay-off was not too far in her future.  Her sister’s husband was killed in action overseas during the war and her sister was expecting a baby.  Betty decided to leave her job at the Bell factory and go to Florida to provide her sister support.  She has lived in Florida on and off ever since that time.  Betty recalls her time during the war working at the Bell Aircraft facility in Niagara Falls with fond memories.  Several of her co-workers became good friends to her and one became a very special friend.  Betty and her friends from her Bell days have shared marriage, babies, their kids’ marriages, grandchildren, and now great-grandchildren and have enjoyed the journey through life together.

The CAF Dixie Wing, based in Peachtree City, Ga., was founded in 1987. The Wing, one of the largest units of the Commemorative Air Force, maintains and flies seven WWII aircraft including a P-51 Mustang, an FG-1D Corsair and rare types such as the SBD Dauntless dive bomber and P-63A Kingcobra. The unit, composed of 300 volunteers, is a non-profit, tax-exempt organization that relies on contributions of time and funds to carry out the mission of the CAF.

For more information, go to www.dixiewing.org.