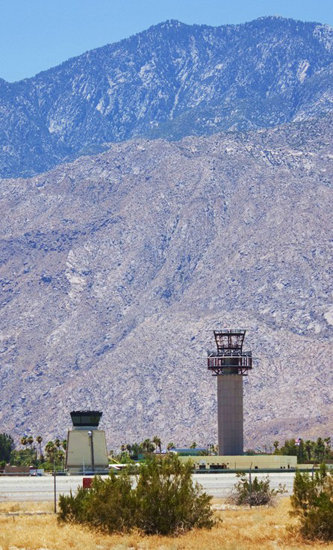 Construction is about 50 percent complete on the new air traffic control tower at the Palm Springs International Airport. The underground utilities, structural steel and concrete work is essentially done. According to the FAA, the contractor is now working on electrical rough in, mechanical rough in, and metal stud walls. The electrical and plumbing installation, and finish work such as paint, tile, carpet will begin next.

Bill Withycombe, Western Pacific Region Administrator for the FAA in Los Angeles said the new tower will be a first class facility when completed. A major improvement over what they have now. The current tower sits in a gulch that prevents air traffic controllers from seeing the end of the runway, which slopes about 75 feet. The tower was constructed in 1967 and stands six stories high. When completed, the new tower will be about twice the height of the original.

The total project cost, including construction, electronics and equipment installation, will be about $24.5 million. The project will create an estimated 150 new jobs during the construction period. Once the new tower is completed, the contractor will demolish the old tower and in its place build a covered parking structure with solar panels on the roof. The solar panels will provide power for the tower and its electrical systems.

FAA Administrator Randy Babbitt said the tower will give our Palm Springs air traffic controllers a more efficient, modernized working environment.  An FAA spokesman said the agency is still expecting to commission the new tower in 2013.   (Photo by Kim Stevens)