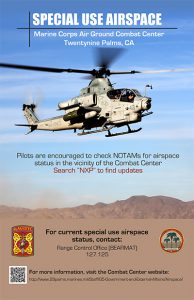 This Temporary SUA temporarily creates, expands, or modifies existing Military Operations Areas (MOA) contiguous to the southwestern, southern and eastern boundaries of MCAGCC and establishes a Temporary Restricted Area over congressionally-established new training range lands in the Johnson Valley area. The Temporary SUA will be activated August 2017. Upon completion of LSE-17, the SUA will return to its previous designation and use in the National Airspace System (NAS). Any changes to the planned Temporary SUA would be published in an updated Notice to Airman (NOTAM) – FAA recommends all aviators to check the NOTAMs daily to be fully informed of any potential changes to the Temporary SUA; please search “ZLA” for current information.

For current information on the airspace establishment project, and further details on the Temporary SUA in support of LSE-17, please visit http://www.29palms.marines.mil/Staff/G5-Government-and-External-Affairs/Airspace/ <http://www.29palms.marines.mil/Staff/G5-Government-and-External-Affairs/Airspace/