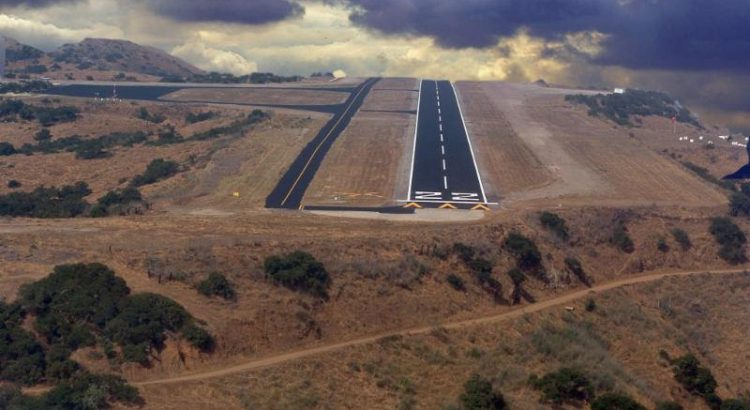 The Catalina Island Conservancy welcomed more than 70 U.S. Marines and Navy Sailors (Seabees) to Catalina Island last week, as the troops arrived via helicopters at the Airport in the Sky to begin work on repairing the aging main runway at Catalina’s only airport.

They joined about 30 other Marines and Sailors who arrived last week to work on the 3,000-foot-long runway at the airport owned and operated by the Conservancy. The nonprofit organization has entered into an innovative partnership with the US Marines and Navy to repair the runway to ensure the airport remains open while also providing the troops with valuable training in a remote location with difficult logistics. The partnership is part of the Department of Defense’s Innovative Readiness Training Program (IRT), which matches community needs with military training opportunities.

The Marines and Sailors have already established an encampment of tents at the airport that include housing, food service, hygiene, medical facilities and more. They plan to spend the next three months replacing the airstrip’s asphalt with concrete, creating a much more durable and reliable surface for landing.

The Marines and Sailors expect to finish the repairs by late March 2019, and the airport is slated to re-open to the public soon thereafter, depending on weather and other factors. The troops will work six days a week, and they will rotate on and off the Island over the course of the project, ensuring more Marines and Sailors benefit from the training opportunity.

“We were so pleased to welcome these amazing young men and women to the Island, and we appreciate their can-do spirit about tackling this task,” said Tony Budrovich, Catalina Island Conservancy president and CEO. “The airport was at risk of closure because of the condition of the runway. This innovative partnership with the Marines and Navy will ensure the airport can remain open another 75-100 years, while also providing a training opportunity to prepare the troops for deployment on islands and other remote locations to build or repair airports and other infrastructure.”

The Airport in the Sky is an historic and critical asset because it provides access to Catalina via air for first responders, travelers, residents and businesses. The airport is the Island’s delivery hub for the U.S. Mail, UPS and other carriers. An estimated 3.5 million pounds of freight, which includes medical and emergency supplies, is also shipped through the airport annually.

For years, the Conservancy has been patching the airport’s main runway, costing approximately $250,000 a year. But the California Department of Transportation’s (Caltrans’) Aeronautics Division had told the Conservancy it needed a long-term repair plan in place by September 2018 to continue to operate the airport as a public airport.

The Conservancy spent nearly 18 months working out the partnership with the Marines and Navy to repair the runway, and it had the help of U. S. Rep. Alan Lowenthal, D-Long Beach, Gary Cathey, former chief of Caltrans Aeronautics Division, and Patrick Miles, Caltrans aviation safety officer.

“We are committed to being good neighbors to our local communities and frequently volunteer time on an individual and unit basis to countless philanthropic organizations,” said 2nd Lieutenant Zachary Bodner, a 3rd Marine Aircraft Wing (3rd MAW) spokesman. “It is an honor to partner with the Catalina Island Conservancy, which does so much for the Island.”

“The Seabees have a long history of building critical infrastructure and serving alongside the other armed services around the world, and the Catalina airport runway repair project will provide a great training opportunity to prepare Seabees for future missions,” said Lt. Saul Perez Ravelo, Civil Engineer Corps, US Navy.