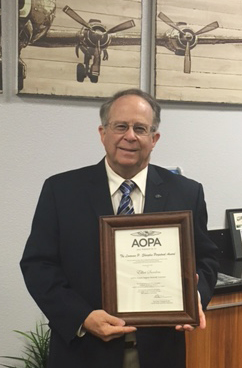 Elliot Sanders, Citizen Advisory Council (CAC) Chair, received the Laurence P. Sharples Award recently from the Aircraft Owners and Pilots Association (AOPA). The annual award is the highest honor given to an individual who has made significant contributions to the advancement of general aviation, which characterized the life of Laurence P. Sharples, one of AOPA’s founding fathers and its first chairman.

Elliot Sanders, President of Planned Approach Benefits, Inc. since 1997, past Chair of the Van Nuys Airport Propeller Association, and pilot has been a long time airport advocate. He was instrumental in the establishment of The Park, the 30-acre facility at Van Nuys Airport dedicated to propeller aircraft. Mr. Sanders was also a member of the Board of Advisors for the AOPA ASN program from its inception.

“Los Angeles World Airports is honored to be a part of this celebration to honor a 20 year veteran of the Van Nuys Airport airfield, Elliot is truly deserving of this award,” said Board of Airport Commissioner Jeffery Daar. “Nobody at VNY has done more than Elliot to promote general aviation and especially the Prop Park,” said Eric Steinhauer, one of three partners of The Park at VNY.

Mr. Sanders, a 30-year Northridge resident, is married and has two daughters.