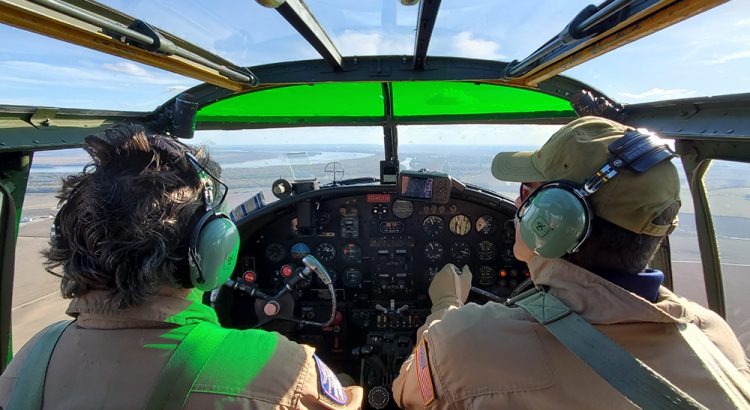 They’re loud. They smoke. They shake. They smell like oil. I love any type of aircraft, but these are just a few of the reasons I have a particular fondness for WWII aircraft. So imagine my excitement when I recently had the good fortune to take a 30 minute ride in the B-25 bomber “Show Me”.

On a recent weekend, my wife Kelly and I flew our Cessna 170 to a fly-in being held at Arkansas International airport (KBYH) in Blytheville, Arkansas. The fly-in was the prelude to a fund-raising event planned for later that evening in a local hangar with the B-25 as the “guest of honor”.  Arkansas International is the former Eaker Air Force Base and, as part of the Strategic Air Command, was home to several types of aircraft including, most recently, the B-52G bomber. The event was being held to raise funds for a National Cold War Museum being planned for the airport to honor and acknowledge the role these aircraft played in keeping our country safe during the cold war era.

Back to the B-25. My experience began with a 20-minute passenger safety briefing that included such items as “don’t touch anything that is painted red” and “whatever you do, DO NOT remove your headset”. As I mentioned earlier…it’s loud. Having been sufficiently briefed, we were then informed where we would be riding in the aircraft. While it is possible to move from the front of the aircraft to the back, it is not allowed in flight. Fortunately, I would be riding in the front. Approaching the aircraft, I noted the presence of oil the entire length of the fuselage…from front to back. It actually smelled of oil and I knew that this was my kind of airplane. Just standing next to it makes you feel like a man! Imagine what riding in it will do.

When the time came to board, I climbed a ladder through a small hatch located on the belly of the aircraft to a compartment just aft of the cockpit. Our pilot greeted us, told us to put on our headset and hook our seatbelts. He then informed us that immediately after take-off, we were “free to move about the cabin”, but DO NOT take off our headset. If we wanted to move forward to the bombardier station in the nose of the plane, we must unplug the headset and take it with us. By this point, I was beginning to think, “…it might be loud in this thing”. Once we were seated, seat belts were buckled and the engines were started, I couldn’t help but notice a few things about the B-25. It’s loud. It smokes. It shakes. It smells like oil. Oh, and it’s cramped. I guess passenger comfort wasn’t very high on the government’s list of requirements for the design of this airplane.

Feeling (and hearing!) the exhilarating thrust of two 1700hp, 14-cylinder, Wright R-2600 Twin Cyclone engines is impossible to describe. Here’s my best attempt…YEEHAW! Once airborne, we unhooked the seat belts and began to look around. As it turns out, one of my favorite views from the airplane was looking out the side of the aircraft through the window located just behind the pilot seat. This view is directly in line with the propellor arc and gives you a very unique perspective of the massive engines located mere feet away. With the tips of the props passing literally inches from your face, you almost feel that you are a part of the airplane and not just a passenger onboard. While enjoying this view, I noticed that you can actually see the airplane fuselage reflected in the polished prop spinner.

After admiring the beauty and power of the engines, I decided to head to the nose of the aircraft where the bombardier’s station is located. Access is through a small tunnel located directly under the pilot’s seat. Since I AM tall and AM NOT young, this presented a bit of a challenge in the cramped confines of the cockpit area. But I would not be denied the incredible experience of riding in the “greenhouse” for the best view of the flight…even if it meant copious amounts of Ibuprofin the next day. Let me just say, it’s worth everything it cost me to get to that seat…and yes, I took my headset with me.

The view is absolutely stunning

As we flew down the Mississippi river at 1500 feet, barges passed below, completely unaware of our presence above. Taking hold of the machine gun in front of me, I couldn’t help but think what it must have been like as a “20-something” year old making bombing runs under heavy anti-aircraft fire from below and enemy fighters above. These brave men were truly heroes and we owe them a debt that can never be paid.

There are times in life where 30 minutes seems like an eternity, but a rare ride in a historic and iconic aircraft is not one of them. Much too quickly, the time came that we must return to our seats and prepare for landing. Back in my seat, with my seatbelt (and headset!) on, I watched the pilots preparing for landing and thought how lucky they were to be a part of the crew that keeps these magnificent machines in the air. But I was also reminded that because they voluntarily give of their time, I was able to experience something that very few people ever experience. Back on the ground, I thanked them for all they do and for the privilege of being a part of the fortunate few.

A ride in this type of airplane is certainly not cheap, but it is worth every penny of the cost and I encourage you to do it if you are ever given the opportunity.

Hopefully, my hearing will return in a few days.