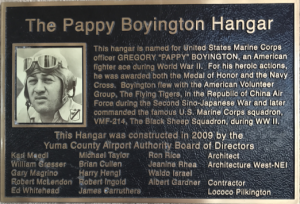 In celebration of its 50th anniversary, the Yuma County Airport Authority (YCAA) has compiled a collection of aviation related memories over the decades to share with the community as a monthly publication.

In November 2010, Major Greg ‘Pappy’ Boyington’s son donated some of his belongings in and decided they should go to where he felt they had belonged, to the Black Sheep Squadron at MCAS Yuma. Pappy’s memorable items were a saber etched with “Boyington”, a watch from when Pappy was recognized as a Medal of Honor winner, and his golden aviator wings. It was without any doubts, the Black Sheep squadron had a purpose for all of these items. Today, the saber sits outside the commanding officers house, the watch was worn during the change-of-commander’s ceremonies, and his golden wings were worn on special occasions by the squadron’s newest pilot.

Pappy flew the F-4 Phantom in Vietnam, he was a World War II “ace-of-aces”, prisoner of war, and a Medal of Honor winner. In memory of this hero, the Airport Authority dedicated a hangar in his name, Greg ‘Pappy’ Boyington, which is currently leased by NASA. 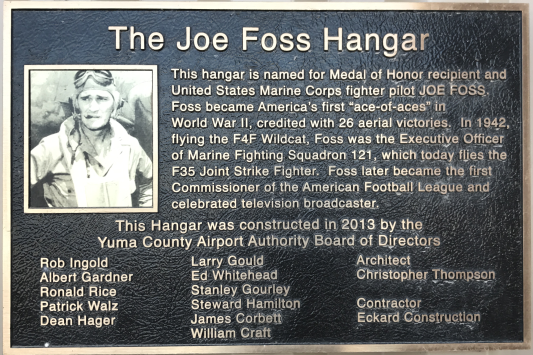 Other historical iconic aviators have been recognized, on November 14, 2012, the Airport Authority hosted a groundbreaking ceremony for the Joe Foss hangar complex. This partially funded $5.2 million facility was constructed with funding from the Economic Department of Administration through a $3.2 million grant and a loan provided by 1st Bank Yuma to the Airport Authority. The facility was locally designed by Chris Thompson of Patterson Thompson Architects and constructed by Yuma’s Eckard Commercial Construction. Other companies who worked on this hangar include NEI, Sternco and JOL. The airports investments to grow infrastructure is to encourage economic development. The hangar was dedicated in honor of Joe Foss of the original squadron VMA121 and coincides with MCAS Yuma VMFA121 rich history.