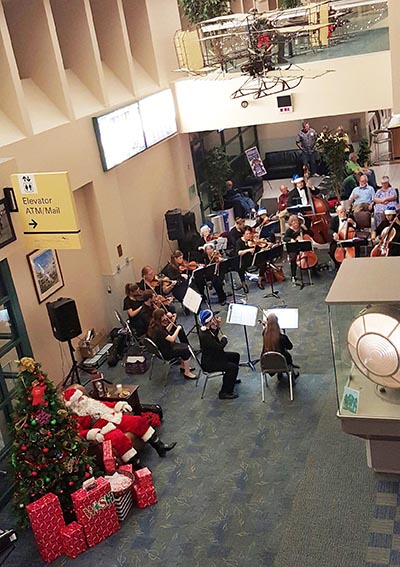 The Yuma County Airport Authority celebrated its 50th anniversary on December 29th having been established by the Yuma County Board of Supervisors to take over the airport and associated activity. The Airport is managed by the Airport Director with the guidance of an eleven (11) member Board of Directors. “Our mission, as the YCAA, is to operate Yuma International Airport on behalf of the citizens and families of Yuma County, and to provide a safe, efficient and customer focused airport to serve Greater Yuma,” said Gladys Wiggins, Airport Director. (Photo – Yuma Civic Light Orchestra performs in the airport terminal).

The Airport Authority concept of management has allowed the Airport to provide and foster civil aviation in the community without a financial burden being placed on the taxpayers of Yuma County. The Authority is a self-supporting entity generating the revenue necessary to operate the airport through rates and charges assessed directly to the users of the Airport.

“There’s often confusion how the Airport Authority and Marine Corps co-exist,” said Wiggins. “The Airport Authority leases the civilian portion of the airport’s land from Yuma County on a fifty year lease which typically renews every 25 years.” The Department of the Navy owns the land the Marine Corps Air Station operates from. The partnership is very unique and is instrumental in the operation of the Airport.

While the airport has been around since the 1920s, it has seen significant transformations over the last 50 years under the direction of the Airport Authority. In the late 1960s there was a fire that engulfed the original terminal. A modular building was put in its place until the new F.C. “Frosty” Braden Passenger Terminal was built in 1999 in recognition for his service to the Yuma County Airport Authority, for which he served as a Director in various capacities from 1970 through 2001.

There have been sixty-five (65) members of our community who have served as a Board of Director, over the course of the past 50 years, and nine (9) Airport Directors. “It is an honor to serve our community and continue building on strong foundations and the footsteps of many great men and women,” said Wiggins. “I am very proud of our Airport and look forward to maintaining what we have but also to the future development within the industry. This milestone is one of many more to come.”

In celebration of the anniversary, the Airport Authority hosted a holiday performance by the Yuma Orchestra Association’s Civic Light Orchestra inside the airport terminal on Monday, December 21st. To continue the celebration, throughout 2016 the community can learn about special events that took place over the past fifty (50) years during that month.