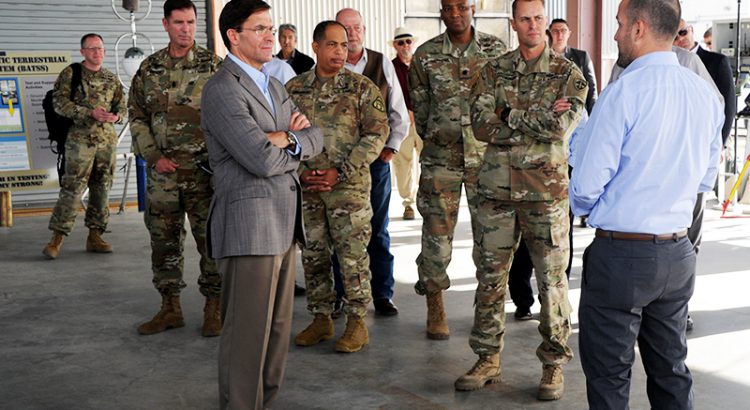 His visit was particularly focused on observing a test fire that was part of the Extended Range Cannon Artillery (ERCA) program, which support’s the Army’s top modernization priority: long-range precision artillery fires.

“I had a great visit to Yuma,” said Esper. “It was a wonderful opportunity for me to see an installation that is central to our modernization efforts. We talked a good deal about all the test equipment and expertise that is found in Yuma that is critical to our Cross Functional Teams.”

The Army aspires to field systems capable of accurately firing at targets 100 kilometers away in the next four years, a dramatic increase over the 30 kilometers a currently-fielded 155mm howitzer shell is capable of when fired at top zone with rocket assistance. YPG testing has already achieved significantly increased distances in test fires conducted at both the proving ground and the nearby Barry M. Goldwater Range.

“The more lethality you can put on a target at great distances, the more overmatch you have,” said Esper.

YPG supports six of the Army Futures Command’s Cross Functional Teams building the Army’s future force, which seeks to retain overmatch with near-peer adversaries in a high intensity conflict while maintaining the competency in waging irregular warfare that has been achieved since the 9/11 attacks. Heavily interested in supporting multi-domain operations in support of other service branches, Esper described the effort as part of the “Army Renaissance” that is currently in progress.

“Yuma is essential to that because we will need to test all of that equipment and make sure that it meets the needs of our Warfighters and ensure we are successful on the future battlefield,” Esper said.

Esper also stressed that YPG’s role as independent arbiters of new materiel’s performance ensures that the Army gets value for its money.

“Yuma is also providing an important role in terms of being good stewards of the taxpayer’s dollars,” said Esper. “We invest a lot of money into modernizing our force and want to be sure we get what we pay for.”

Esper’s message for the YPG workforce and Yuma community is that YPG is vitally importance to the country.

“The work that is happening here at Yuma by our military and a large cadre of civilians is critical to our nation’s security,” Esper said. “It is important because we want to make sure we deploy weapons that work as we expect them to, that deliver to the Soldiers what they need and when they need it.”