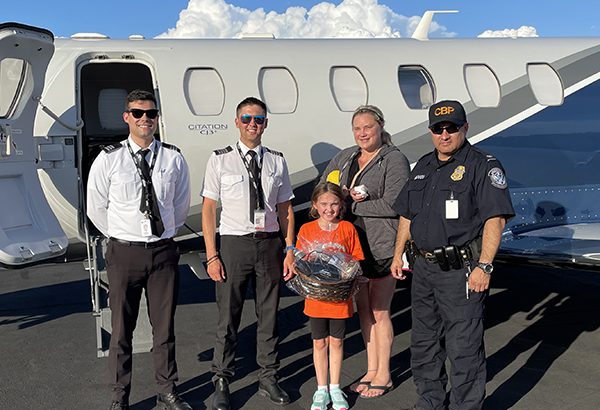 If this pace keeps up, especially as the airport enters its higher operational months, the city projects ending the year with about 2,090 aircrafts. This is leaps and bounds ahead of the 490 aircraft processed in 2012/13. Scottsdale has offered U.S. Customs and Border Protection (CBP) through a user fee service since 2000.

“Scottsdale Airport is a viable customs processing destination,” says Gary P. Mascaro, aviation director. “We strive to offer a great customer service experience, which is made possible thanks to our partnership with CBP.”

Through the years, new initiatives have been implemented: the Customs service hours and days were expanded, we added an additional Officer to meet the demand, and an online payment system was recently activated. Since executing these initiatives, there has been a steady increase in CBP’s processing over the years.

The mother and daughter duo (pictured above) are the 2,000th user and arrived into Scottsdale from Calgary, Canada. They were surprised with a gift basket filled with Scottsdale Airport goodies and a Volanti Restaurant and Lounge gift card.