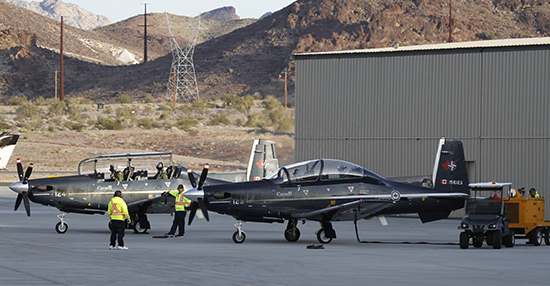 Their training mission moved to the Colorado River area to boost and continue intensive flight training during the months of inclement weather in the North when flying activities are reduced. Each group of 45 plus instructors and students have had a significant positive economic impact on the Havasu community, been great guests and very accommodating. We all have collaboratively worked through possible noise and traffic pattern adjustments quickly and safely.

Community infrastructure (lodging, restaurants, hospitality, airport, FBOs, based pilots, airspace and fine weather), have all contributed to very high utilization rates, training sorties and a cost effective missions. The RCAF has commented on the community hospitality, friendly atmosphere and citizens thanking them for their service. The based pilot community at Lake Havasu has been impressed with the RCAF pilot’s consideration for general aviation air traffic utilizing the airport.

The collaboration of the City, Convention Visitor’s Bureau, community businesses and airport tenants made this all work seamlessly.