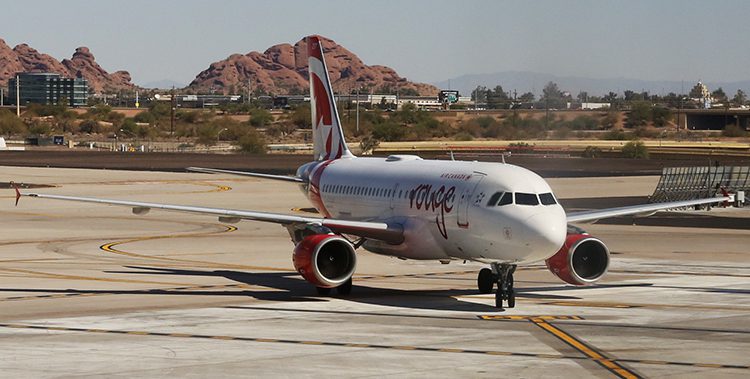 Air Canada Rouge will operate the new route between Phoenix Sky Harbor International Airport and Montreal-Pierre Elliott Trudeau International Airport from Feb. 22 to May 28, three times per week. The flight will be served by an Airbus A319 aircraft. This new service to Canada will provide a vital link for visitors and the international business community.

As a bonus, Air Canada made a surprise announcement that it has already renewed and increased this service: This flight will resume on Sept. 6 and will continue through May 2019 on the same schedule and served by an Airbus A319.

“This newest route offers nonstop service to a major international hub and Phoenix’s second largest trading partner,” said Phoenix Mayor Greg Stanton. “We continue to push Phoenix to be more globally connected, and this direct line to Montreal is good for export-focused businesses and tourists alike.”

Canada is a major Arizona trading partner with exports to Canada valued at more than $2.2. billion per year. Last year, Arizona registered a $755 million trade surplus with Canada, according to the U.S. Census Bureau, which tracks the value of imports and exports for U.S. states and metro areas. Many Canadian companies say they like sites in Arizona, because of the proximity to West Coast U.S. markets and major Mexican markets. According to City of Phoenix Community and Economic Development, there are more than 460 Canadian-owned companies in Arizona.

The economic importance of this new route was made clear by leaders from around Arizona who gathered for the inaugural service.

In addition to Mayor Stanton of Phoenix, Mayors from Maricopa, Surprise, Tolleson, Wickenburg, and Tucson, as well as the Vice Mayors of Flagstaff and Mesa, and Presidents of the Fort McDowell Yavapai Nation and of the Salt River Pima-Maricopa Indian Community attended the launch of service.

Mayor Stanton is Chair of the Maricopa Association of Government’s (MAG) Economic Development Committee, and today’s event was held in partnership with MAG.

The new service to Montreal brings the total number of cities served by nonstop flights from Phoenix to Canada to 10. The newest connection to Montreal also provides additional access to Air Canada’s global network. For more information on this new route as well as other new international service offered at America’s Friendliest Airport®, please visit skyharbor.com/flyphx.