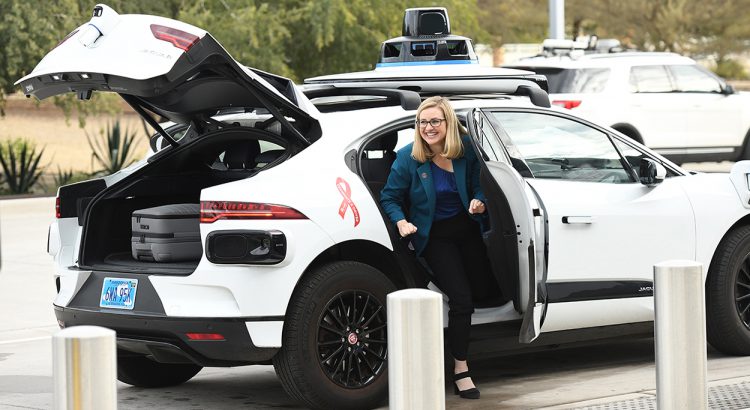 Photo above – Phoenix Mayor Kate Gallego takes the first ride to the airport in a Waymo autonomous vehicle.

Phoenix Sky Harbor International Airport, America’s Friendliest Airport®, has set another milestone with Waymo launching fully autonomous vehicle service to the general public at Phoenix Sky Harbor. Phoenix Mayor Kate Gallego arrived at the 44th Street and Washington PHX Sky Train® Station via a Waymo vehicle to launch the new service. This set a global milestone as Phoenix Sky Harbor became the first airport in the world to offer travelers the ability to take a Waymo autonomous vehicle as a means of transportation to and from the airport.

“Phoenix is leading the future of mobility and modernizing how the world will experience travel,” said Phoenix Mayor Kate Gallego. “The exciting technology offers our customers an additional option for traveling to the airport in a clean, sustainable, and technologically advanced mode of transportation. The future has arrived in Phoenix!”

Waymo also announced today it is more than doubling the Waymo One service area in Downtown Phoenix. The expansion connects the airport service to a large swath of the downtown area, offering safe and convenient mobility options to Phoenicians and travelers alike.

This new service comes two years after Waymo opened its fully autonomous commercial ride-hailing service, Waymo One, to the public in the East Valley of Phoenix; and builds on the company’s strong partnership with the City of Phoenix.