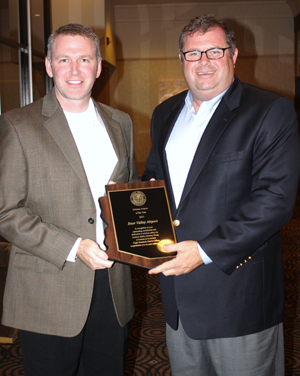 The Phoenix Deer Valley Airport was recently presented the 2012 Airport Safety Award by the Aviation Safety Advisory Group of Arizona (ASAG). The award is one of many handed out each year during the organization’s annual awards banquet held in Phoenix.

In January 2012, the Phoenix Deer Valley Airport set out to create a “Culture of Safety” at the nation’s busiest general aviation airport.  To do this, the airport partnered with various aviation groups and the FAA. “The airport partnered with the Deer Valley Pilots Association, Civil Air Patrol, Federal Aviation Administration Safety Team (FAAST) volunteers, Deer Valley’s Air Traffic Control Tower, Aircraft Owners and Pilot Association representatives, and the Aviation Safety Advisory Group of Arizona,” said Phoenix Deer Valley Airport Manager Art Fairbanks. (Photo – Chad Makovsky, left, Assistant Aviation Director, City of Phoenix and Art Fairbanks)
These efforts have had the effect of eliminating aircraft incidents at the airport.  Each of these initiatives is part of a partnership with the pilot safety community; this cooperative approach helps to multiply resources and leverage for more effective results.
From 2006 through 2011 there have been a total of 19 non-fatal incidents and 5 fatal accidents. So far in 2012 there have not been any. "The secret sauce of enhanced safety at Phoenix Deer Valley is collaboration," said Fairbanks. "By teaming up with safety groups from around the state, we can leverage the safety message in a way that makes it much more powerful."
Attachment: