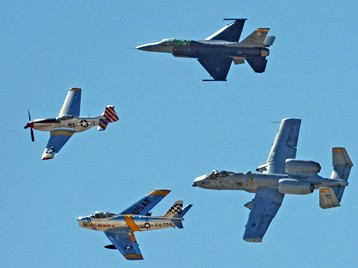 According to George Santayana, a Spanish philosopher, essayist, poet, and novelist: “Those who are unaware of history are destined to repeat it.”
The U.S. Air Force, as a way to honor its heroes of the past, the present and the future, created the Air Combat Command (ACC) Heritage Flight Program (http://www.airforceheritageflight.org/) 15 years ago.  “It’s a representation of the air force’s past, it’s present and it’s future,” said Thomas Gregory III, call sign “Gumby.”
A veteran aviator with the U.S. Marine Corps, Gregory has been flying for the Lone Star Flight Museum since 1993 and is qualified on a number of warbirds. He was one of the first civilian warbird pilots to volunteer for participation in the Heritage Flight program. “I’m one of the original 12 selectees for the program,” he said. “This is my 15th season to fly heritage.” (Photo by David Ricker)
During the four-day course, Feb. 28 through March 3, Davis-Monthan Air Force Base, near Tucson was the host for the annual Training and Certification Course designed to make certain that Heritage Flight pilots, both civilian and military are capable of safely flying in close formations during air shows around the country.
The training program started in 1999. “It’s a requirement for the program. We train up our new pilots. We refresh those of us who are veterans and continue with the program,” Gregory explained.
In a statement, air force officials said that participation by active duty pilots in Heritage Flights might cease after certification due to prioritization of flying hours as part of budget uncertainty and fiscal constraints. Decisions on Department of Defense and air force support of aerial demonstrations and flyovers will be announced as appropriate. The previously scheduled Heritage Flight training program went ahead as scheduled in order to ensure that if there is a favorable resolution to current fiscal challenges aircrews can safely perform flights.
Historic aircraft flying during the training included the P-51 Mustang, the P-40 Warhawk, the A-36 Apache, P-47 Thunderbolt, A-1 Skyraider and the F-86 Sabre. ACC aircraft included the F-4 Phantom II, A-10 Thunderbolt II and the F-16 Fighting Falcon.  (F-4 Photo by David Ricker)
Gregory explained that the biggest issue facing participating pilots is the vast difference in speed. “The issue is for the jet to slow down enough to stay with us,” he explained. “The difference in performance is quite drastic. We can be taxed at times when we’re on the wing dealing with differentials of horsepower. We’re real careful with our throttle and our engines so that we don’t overtax our equipment.”
Capt. Zach Krueger, an A-10 pilot with the 357th Fighter Squadron at Davis-Monthan, volunteered to assist community residents and base personnel and their families attending the Heritage Flight training. The six-year veteran was in awe of the warbirds on the flight line while admitting he would be challenged to find the starter button. “Flying it would be pretty fun,” he said. “It’s pretty cool to see these old airplanes and to think about the history and stuff behind them.”
Attachment: