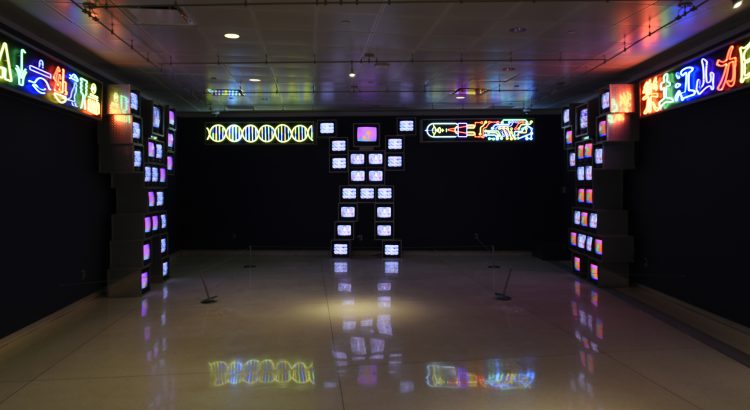 Do not be alarmed! The robot figures are not menacing, but part of an intriguing technology-based sculptural installation by the “Father of Video Art,” Nam June Paik (1932 – 2006). Titled, ElectroSymbio Phonics for Phoenix, the artwork was originally commissioned for Phoenix’s new America West Arena (now Talking Stick Resort Arena) in 1992. The robots stood along the doorways leading to the arena from the food court, only to be removed during renovations in 2002.

Visitors to the Museum Gallery will be treated to an immersive experience. The three robots contain 63 televisions activated by four custom video channels created by the artist. Four vibrant neon murals – depicting symbols of technology, biology and language – flank each figure. The symbols include DNA strands, Chinese characters, an electronic transistor signal and Egyptian hieroglyphs. The glow of technology and neon will mesmerize the viewer.

Innovative and visionary, artist Nam June Paik played a leading role in bridging the gap between art and technology. Paik is credited as the first to use television as an art medium. Throughout an art career that spanned more than three decades, Paik predicted how media would completely change our lives. As early as the 1970s, he coined the term “Electronic Superhighway” to describe the potential technology had to transform the way we share ideas and collaborate. His experimental work with broadcasting and technology laid the groundwork for many artists working in digital media today.

Electro-Symbio Phonics for Phoenix is on display at the Phoenix Airport Museum Gallery, located in Phoenix Sky Harbor International Airport, Terminal 4 on level 3. The exhibition may be viewed for free during gallery hours, 6:00 a.m. to 9:00 p.m. through July 2021.

The Phoenix Airport Museum is one of the largest airport art museums in the U.S. The museum includes an art collection of nearly 900 artworks, more than 40 exhibition spaces in six buildings and an Aviation History Collection. For more information, visit http://skyharbor.com/Museum/ExhibitionsTerminal4.html