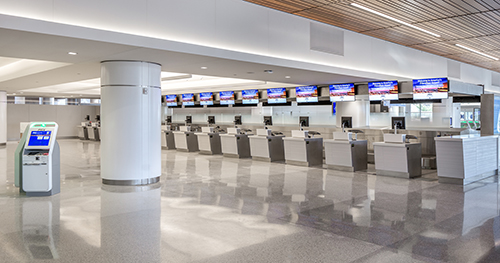 The first phase of the Terminal 3 Modernization Program at Arizona’s Phoenix Sky Harbor International Airport (PHX) is nearing completion and will open its doors to the public later this year. The phased Terminal Modernization Program will greatly improve the passenger experience and create a world-class facility for airport visitors.

The key design strategies for the planning approach was to provide the traveler with a sense of place and orientation. The major functions (ticketing, baggage claim, security checkpoint and gates) have been organized to improve the passenger experience by creating a natural flow with intuitive wayfinding throughout the facility. Coupled with modern, hospitable finishes, abundant natural light and passenger amenities, the modernization will attain its goal of providing a superior travel experience within a world-class facility.

In order to remain operational throughout construction and have as little of impact to the passenger as possible, the program is broken into three components: the Terminal Processor, the South Concourse and the North Concourse, with the first component being the Terminal Processor. The upgrades include a Great Hall for a centralized post-security passenger experience, enhanced passenger amenities and a larger, consolidated security checkpoint to provide efficiency and reduced wait times. Improved airline ticket counter space accommodates today’s modern check-in process and additional baggage carrousels increase handling capacity.

The modernization embraces the facility’s unique location and place, responding to Phoenix’s culture, community, progressive architecture and sustainable desert building techniques. “By opening up the old terminal DWL designed back in 1978, we were able to incorporate spectacular atrium spaces, skylights with natural light and exclusive views, connecting travelers back to the City and native Arizona desert landscapes. This is an experience unlike many airports around the world,” said Steve Rao of DWL Architects + Planners, Design Team Director for the project. By making this connection to the surrounding mountains and city views, the design team was able to take advantage of being located in the heart of the city. The design reinforces the overarching goal of creating a sense of place for the community.

The glass façade on the west establishes the new “front door” for the airport, encapsulating a cutting-edge, industry-leading facility. The modernization of the existing terminal, as part of the larger holistic campus, provides monumental opportunities to create an identity and incorporate Phoenix Sky Harbor’s aviation legacy. This, reinforced by the connection to the PHX Sky Train® and the City’s Light Rail System, establishes the foundation for the future of the airport.

Together with HuntAustin, a Design/Build joint venture, and in collaboration with DWL Architects + Planners, Inc., Corgan and Smith GroupJJR, this team has achieved the goal of creating a world-class facility. As the designers of the original Terminal and the lead architect of this terminal modernization, DWL brought a sense of stability, vision and understanding to the team. Future phases of the project will see an all new South Concourse and a modernization of the North Concourse with additional restaurant and retail options, all with a goal of improving the way one travels through America’s Friendliest Airport®.

Phoenix Mayor Greg Stanton hosted a media tour on October 21, 2016, providing media an exclusive sneak peek at the upgrades completed in phase one of construction.