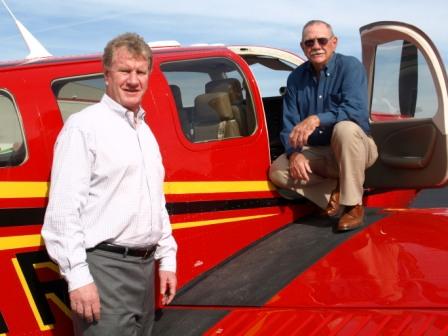 Painted to match the first Bonanza accepted by Cutter Aviation in 1946, the G36 was picked up in early February from Wichita and flown to Phoenix by William R. "Bill" Cutter and Sid Cutter. The two brothers were the second generation owners of Cutter Aviation after taking over from their father William P. Cutter who founded the company in 1928.

Current Cutter Aviation President Will Cutter on hand at delivery as well reported over two thousand Beech aircraft has passed through Cutter Aviation’s door in the time Cutter was a dealer.

This brings to an end a 63-year relationship as one of the leading dealers in the country. The delivery saw the end of the Hawker Beechcraft dealer network era, which was dissolved at the beginning of 2009 when the planemaker decided to make all sales of new aircraft factory-direct.

Cutter will continue to seek and offer pre-owned Beechcraft aircraft as well providing maintenance and service at their authorized service centers in Phoenix, Albuquerque, and Dallas.

Pictured above are Will Cutter, left and William R. "Bill" Cutter with N460YR.
Photo Courtesy of the ADOT/Aeronautics Division.