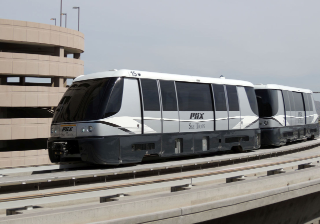 Bombardier Transportation announced recently that it has been awarded a contract by the City of Phoenix for an extension to the PHX Sky Train® automated people mover (APM) system at Phoenix Sky Harbor International Airport. The agreement represents Stage 2 of the system and covers a 2.5-mile extension to the airport’s rental car center, two new stations, an expansion of the system’s maintenance facility, and the supply of 24 additional BOMBARDIER INNOVIA APM 200 vehicles. The contract is valued at approximately $305 million US (248 million euro) and includes options for three additional vehicles as well as for various vehicle retrofits and upgrades.

Benoit Brossoit, President, Americas Region, Bombardier Transportation said, “We are delighted to be part of Phoenix Sky Harbor International Airport’s modernization and expansion program and to help support the airport in meeting its future mobility solutions requirements.  We place great value on our long-term relationship with our valued customer.  As both the supplier and operator of the automated people mover system, we are confident that our INNOVIA technology will continue to provide exceptional service.”

Under contracts awarded in 2009 for Stage 1 of the system, Bombardier designed and supplied all electrical and mechanical equipment, including the highly-proven BOMBARDIER CITYFLO 650 automatic train control technology, a maintenance facility, and a fleet of 18 INNOVIA APM 200 vehicles.  In addition, Bombardier has provided operations and maintenance services since the system opened in 2013, transporting travelers 24 hours a day, 365 days a year.

The Bombardier APM system in Phoenix has a proven track record, achieving over 99.5 percent availability each year since the system opened, and reaching 100 percent availability in a given month six times, most recently for the month of January. This level of performance has led airports around the world, including eight of the 10 busiest airports in the United States, to choose Bombardier for their automated transit systems.