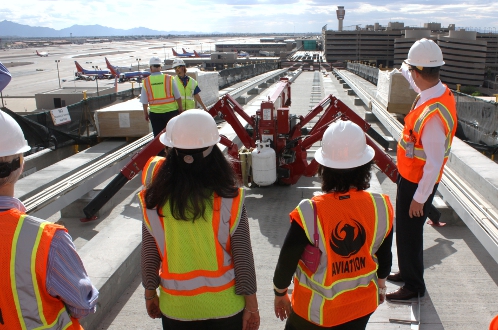 Members of the aviation media, many in town for the 2011 Sky Harbor International Aviation Symposium were treated to a tour of Stage One construction of the Sky Train, underway at the Phoenix, AZ airport. Stage One, will run between the METRO light rail station on 44th Street, East Economy parking and Terminal 4 and is scheduled to open sometime in the first quarter of 2013. Look for more information on Sky Train in an upcoming issue of the Arizona and State Aviation Journals.  (Photos by Kim Stevens – Members of the media on the bridge over the taxiway, which is high enough for a 747 to pass underneath. Sky Harbor Project Manager, Jay Dewitt describes part of the construction.)