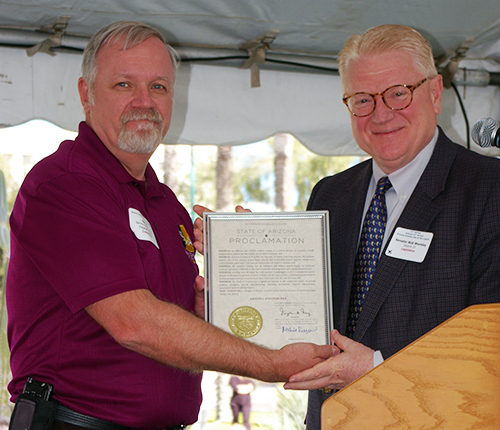 The 11th Annual Aviation Day at the Capitol, organized by the Arizona Airports Association (AzAA) was held Thursday, January 28th on the lawn of the state capitol and featured static aircraft and a large welcome tent with table-top displays set up by many of the aviation and aerospace companies in Arizona.

The Mission of Arizona Aviation Day at the Capitol, which was named the 2015 ‘Best Capitol Lawn Event by the Capitol Times Newspaper, is to inform the legislative members and staff of the Arizona State Government about the benefits and economic impact of aviation within the State of Arizona. The Mission also introduces these individuals to the significant contributions made by the many businesses, organizations, and associations which support aviation in their communities and throughout the State.

The governor, legislators and the State Transportation Board members, all received an invitation to join in the festivities and visit with airport and industry representatives. Senator Bob Worsley, representing District 25 and a member of the Sen. Transportation Committee, presented AzAA with a signed proclamation from Arizona Governor Doug Ducey, announcing Thursday, January 28th as Arizona Aviation Day.