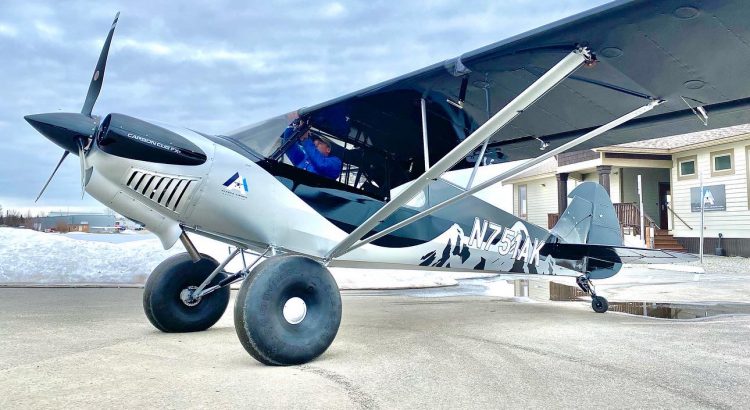 A brand new 2022 Carbon Cub FX-3 is being given away as the Grand Prize in an annual raffle to benefit the Alaska Airmen’s Association and the many general aviation programs they support throughout the state. The 3rd generation Carbon Cub, produced at CubCrafters in Yakima, Washington, has now arrived at the Association’s Lake Hood headquarters in Anchorage for the upcoming raffle to be held May 8th at the Alaska State Fairgrounds.

The airplane to be given away, N751AK, was built as an educational experience for youth members of the Airmen’s NextGen Club through the CubCrafters amateur builder assist program. “This is the first time we have ventured into the realm of experimental amateur built aircraft, and we couldn’t be more excited to be collaborating with the leading manufacturer of the modern Super Cub,” said Abby Austin, Executive Director of the Airmen’s Association. Travel for the amateur builders participating in the CubCrafters program was provided by Alaska Airlines, another program sponsor.

The Airmen’s Association annual raffle is the largest general aviation fundraiser in Alaska. All proceeds from the raffle fund the majority of the Association’s annual operations, including maintaining access to the places general aviation pilots love to fly, improving safety infrastructure across the state, building the Alaska aviation community, and inspiring young people to pursue our way of flight. Buying a raffle ticket or tickets is a great way to support all of these programs.

Patrick Horgan, President and CEO of CubCrafters adds that: “All of our team at CubCrafters was honored to be selected by the Airmen’s Association for this build. The company founder, Jim Richmond, was an Alaskan by birth, had a deep connection to the community of aviators in Alaska, and knew their needs. The airplane being given away, the Carbon Cub FX-3, was designed specifically with the Alaska pilot in mind, and Jim really considered it the ultimate Alaskan bush plane.”

Building this airplane was a team effort and several other leading aviation companies partnered with CubCrafters to support this effort for the Airmen’s Association. Hartzell Propeller provided the new Pathfinder 3-bladed composite propeller, Lycoming Engines built the lightweight CC363i 186 hp fuel injected powerplant, the IFR capable G3X glass panel avionics came from Garmin, and ACME Aero supplied their Black Ops suspension for the build. In addition (if the raffle winner is local), Alaska Aircraft Sales, the local CubCrafters Authorized Service Center located on Lake Hood, is donating the first year of scheduled aircraft maintenance. As a separate prize, Best Tugs is donating one of their revolutionary new Alpha 3 electronic tugs to benefit the Association. “We’re deeply grateful for all of these amazing partners in this effort,” says Brad Damm, CubCrafters Vice President of Sales and Marketing. “Building an airplane for this purpose wouldn’t have been possible without them.”

The FX-3 is the most Alaska capable Carbon Cub offered by CubCrafters. With almost 1000 lbs. of useful load, over 750 miles of range, and big tire cruise speeds in excess of 130 MPH, the aircraft can still land and take off from even the most primitive of landing strips in under 200’. There just isn’t a more capable airplane for backcountry adventure.

To buy tickets to win this amazing airplane, you must call the Association at (907) 245-1251, weekdays between 8AM and 5PM Alaska Daylight Time. The FX-3 winner will be drawn on May 8th, 2022, in Palmer, Alaska, at the Alaska State Fairgrounds during the Great Alaska Aviation Gathering tradeshow. You don’t need to be present to win the FX-3, and the raffle itself is open to all, including non-Alaskans. Full details for the raffle are on the Airmen’s Association website at: https://alaskaairmen.org/raffle/