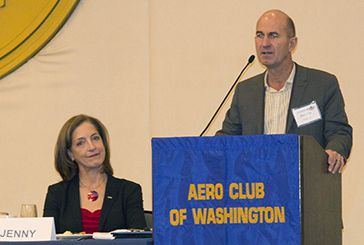 “KFC Baby,” said Dave Vos, head of Google X’s Project Wing experimental drone delivery program, during a speech at the Aero Club of Washington on last week. Vos uses the acronym KFC (be Kind, Firm and Care) to describe the process of working together to achieve success in the world of automated aviation – his term for drones. (Photo – Vos and Margaret Jenny, 2016 President of the Aero Club of Washington and RTCA, Inc. President. Photos by Kim Stevens)

Drone deliveries by 2017 might seem like wishful thinking, but Vos says it’s possible because the hurdles aren’t technical, they’re regulatory. An example VOS cited was the FAA’s drone registration process recently completed before the holidays. Despite the current regulations, Vos pointed out, that it was only in October that the FAA teamed up with drone operators, tech companies including Google, and others, including the National Association of State Aviation Officials (NASAO), to help create a registration system for drones. That system went live only two months later and to date more than 200,000 drone owners have registered.

“I love thinking about what’s possible,” said Vos to the Aero Club audience, “And then doing it!”