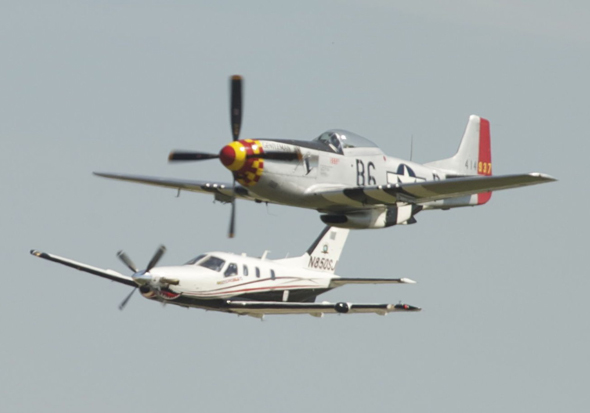 The race was held July 29 as part of DAHER-SOCATA’s celebration marking 100 years of continuous aircraft by the company and its predecessors, and the video highlights are now posted on the official TBM 850 website: http://www.tbm850.com/Morane-Saulnier-100th-Anniversary

This friendly fly-off was performed over a traditional 6-lap course utilized in the National Air Race Championships’ Unlimited category to find out which was faster: the turboprop-powered TBM 850, or the North American P-51 – which is one of the fastest single-engine piston aircraft of all time.

The TBM 850 was provided for the race by its owner, Steve Walenz of Spirit Lakes, Iowa, and was flown by Bob Odegaard, a renowned National Air Race Championship pilot.

Providing the competition was a P-51D-30NA, which carries the “Gentleman Jim” markings to honor World War II fighter ace Capt. Jim Browning – who went missing in action during 1945.  This aircraft is owned by Jack Roush of the Roush Industries research and development company, which is well known for its sponsorship of a NASCAR car racing team. The P-51 was flown in the race by Jimmy Leeward, a legend of the Reno Air Races and real estate developer, who also is a Hollywood movie industry stunt pilot.

Nicolas Chabbert, President of SOCATA North America, and Senior Vice President of the DAHER-SOCATA Airplane Division said they held this symbolic race to celebrate the 100th anniversary of aircraft manufacturing excellence at their company, which always has been performed to the high standards of both speed and style. The 2011 EAA AirVenture gathering brought together aviation enthusiasts from around the world, for the head-to-head challenge.

For the race results, the TBM 850 crossed the finish line a few seconds ahead of the P-51, enabling both pilots to underscore their flying skills and the capabilities of their aircraft.

The TBM 850 is the world’s fastest single-engine turboprop, with a maximum cruise speed of 320 KTAS at 26,000 ft. (in ISA conditions). An 850-shp. version of SOCATA’s proven six-seat TBM 700 turboprop business aircraft, the TBM 850 combines the cruise speed and travel times typical of light jets with economical direct operating costs, while offering the range and excellent payload capacity of turboprop aircraft.