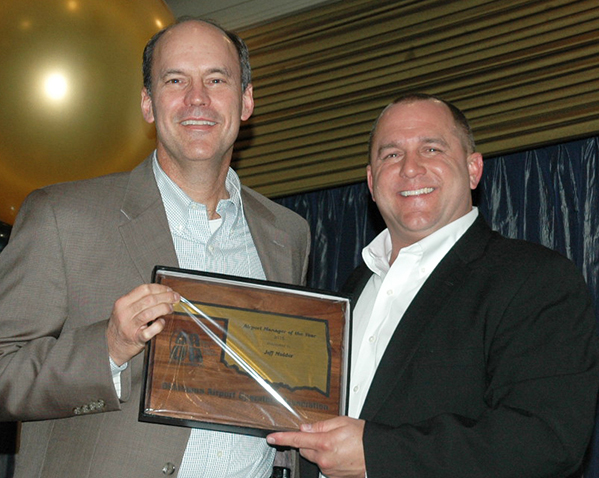 During their annual conference in Tulsa earlier this month, the Oklahoma Airport Operators Association (OAOA) named Madill Municipal Airport as its Airport of the Year. Jeff Mulder, director of airports for the Tulsa Airports Improvement Trust, which manages and operates Tulsa International Airport and R.L. Jones-Riverside Airport, was also selected as OAOA’s Airport Manager of the Year.

Madill Municipal Airport Manager David Sprouse said after hearing OAOA President and Ardmore Airport Manager Chris Bryant announce that the top airport was located near Ardmore, he thought they had a chance to win.
“With us being a small airport, you wouldn’t think we would win since there are more airports larger than ours around the state that are able to do more (projects). So, needless to say, I was very surprised and happy that we won,” Sprouse said. (Photo – Jeff Mulder, left, director of airports for the Tulsa Airports Improvement Trust, accepts the “Airport Manager of the Year” award from Oklahoma Airport Operators Association President Chris Bryant during the OAOA’s annual conference in Tulsa earlier this month.)

Sprouse said the airport has undergone several improvements over the last couple of years that may have contributed to their selection as airport of the year, including a rehabilitation of the runway, taxiway and apron. He believed the recent renovation of a storage facility located at the airport into a pilot’s lounge may have been the deciding factor, however.
“Many pilots, including those working for Big Tex Trailers here in the city, would fly in and not have anywhere to go while company executives were in their meetings. There were no restrooms, and sometimes, they would even stay in their aircraft for several hours, especially during really cold days,” Sprouse said.

 Local pilots Larry and David McDaniel were extremely influential in getting donations to renovate the storage unit, Sprouse said. And with financial help from Big Tex Trailers, a major user of the airport, and the family of Dick Phillips, a long-time pilot in Madill who is now deceased, the City of Madill was able to convert that old storage facility into a nicely equipped lounge, complete with central air and heat and, more importantly, separate men’s and women’s restrooms. (Photo – “Madill Municipal Airport Manager David Sprouse, left, accepts the “Airport of the Year” award from Oklahoma Airport Operators Association President Chris Bryant during the OAOA’s annual conference in Tulsa earlier this month.)

As for any other airport projects on the horizon, Sprouse said a runway extension was one possibility. “We would like to get to the point where our runway is long enough to bring in some of the larger, twin-engine aircraft,” Sprouse said, which would mean at least another 600 to 800 feet of runway pavement.

Jeff Mulder has served as Tulsa’s airports director for nearly 10 years now after serving 17 years in airport management positions at airports in Wisconsin, Indiana and Louisiana. The Western Michigan University graduate, who is also an instrument-rated pilot, said being selected as airport manager of the year was particular gratifying.

“It was a very nice surprise and certainly an honor receiving the award from OAOA, especially in Oklahoma where aviation is such a backbone to industry and has such a great history here,” Mulder said. Mulder said his tenure as airports director may have been the biggest reason he was named airport manager of the year. “Sometimes, longevity is just a sign of success that an airport director is able to stay in the saddle long enough,” Mulder joked. There is never a dull moment working at an airport, according to Mulder, as there is always another issue or challenge just around the corner.
“That’s what makes our industry so interesting; there is always something else to deal with and there’s plenty of variety,” said Mulder, who also enjoys serving on various industry associations and helping shape policy.

This past year, Mulder served as first vice chair for the American Association of Airport Executives (AAAE) and will serve as chair this year. AAAE, along with the OAOA and the Oklahoma Aeronautics Commission, joined forces to plan this year’s conference. “I really enjoy it, and it was great to have our conference in Tulsa. It was a lot of work but a lot of fun. I thought it turned out well,” he said.