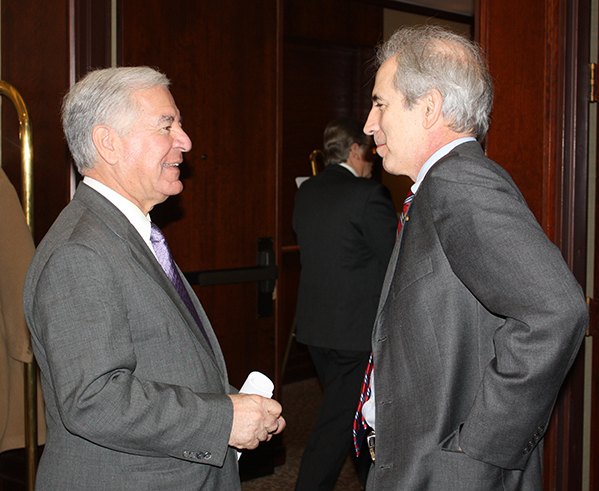 State aviation offices along with numerous aviation trade associations raised their collective voices in support of a memo released on Friday, by U.S. Transportation Secretary Ray LaHood, who announced that USDOT did determine that the recently enacted Reducing Flight Delays Act of 2013 allows the Federal Aviation Administration (FAA) to transfer sufficient funds to end employee furloughs and keep the 149 low activity contract towers originally slated for closure in June open for the remainder of fiscal year 2013.

Victor Bird, director of the Oklahoma Aeronautics Commission (shown on the right with Congressman Nick Rahall, D-WV), applauded Secretary Ray LaHood’s announcement.  “The decision officially announcing that the federal government will fund air traffic control tower operations for the remainder of the current fiscal year is certainly good news to the millions of people who use commercial and general aviation aircraft to get to their intended destinations,” said Bird. “There have been a number of people and organizations who have worked tirelessly over the last several months to convince federal officials of just how dangerous closing those towers would be. We can now exhale and begin to work on making sure funding is in place for fiscal year 2014 and beyond.”

J. Spencer Dickerson, Executive Director of the U.S. Contract Tower Association (USCTA) said they are grateful that the leaders of DOT and the FAA have moved to utilize the clear authority provided by the Congress to keep contract towers open and operational beyond June 15. “In particular, we appreciate the leadership of the dozens of senators and members of the U.S.

House of Representatives who have worked diligently to ensure that these important air traffic facilities remain open now and well into the future.   Their dedication and determination give us great hope for the long-term success of the Contract Tower Program."

Aircraft Owners and Pilot Association (AOPA) President and CEO Craig Fuller welcomed the announcement as well. In a statement, Fuller said they are pleased that the FAA has decided to use the flexibility granted by Congress to keep 149 air traffic control towers open and operating as lawmakers intended. The decision, according to Fuller, helps ensure the continued safety and efficiency of our general aviation airports and the national air transportation system as a whole. “The entire aviation community has worked diligently for this outcome, and we hope that any future spending cuts necessitated by sequestration will be made only after a comprehensive and thoughtful evaluation of their impact on system users.”

The FAA will also put $10 million towards reducing cuts and delays in core NextGen programs and will allocate approximately $11 million to partially restore the support of infrastructure in the national airspace system.