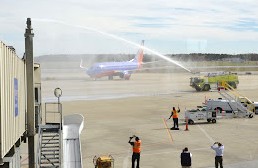 Southwest Airlines started service this week at Richmond International Airport. The low-fare, no-frills carrier is entering the Richmond market initially with just one daily round-trip, nonstop flight to Orlando, Fla., the capital region’s No. 3 destination with about 173,000 annual passengers. But while Southwest’s arrival at RIC may have small short-term impact, in the long run, the airline could be crucial for the region’s economic competitiveness.

“When the American Airlines and US Airway merger goes through, then there’ll be four (major) airlines left,” said Jon E. Mathiasen, Richmond International’s president and CEO. “It’s important that Richmond has all of these carriers at its airport.”

Historically, the Dallas-based carrier’s entry into a market had produced lower fares and increased passenger traffic, a phenomenon called the “Southwest effect.” Local officials think the Southwest effect could work its magic in Richmond, too. “It’s a powerful brand. People make an instant association with low fares,” Bell said. “It’s a remarkable brand of service. They’ve received slews of awards and accolades for what they do.”

Southwest is one of the most honored airlines in the world, known for its triple bottom line approach that takes into account the carrier’s performance and productivity, the importance of its People and the communities it serves, and its commitment to efficiency and the planet.